Dekay signs with the Dig It! label by Chinese Man Records thanks to Groover 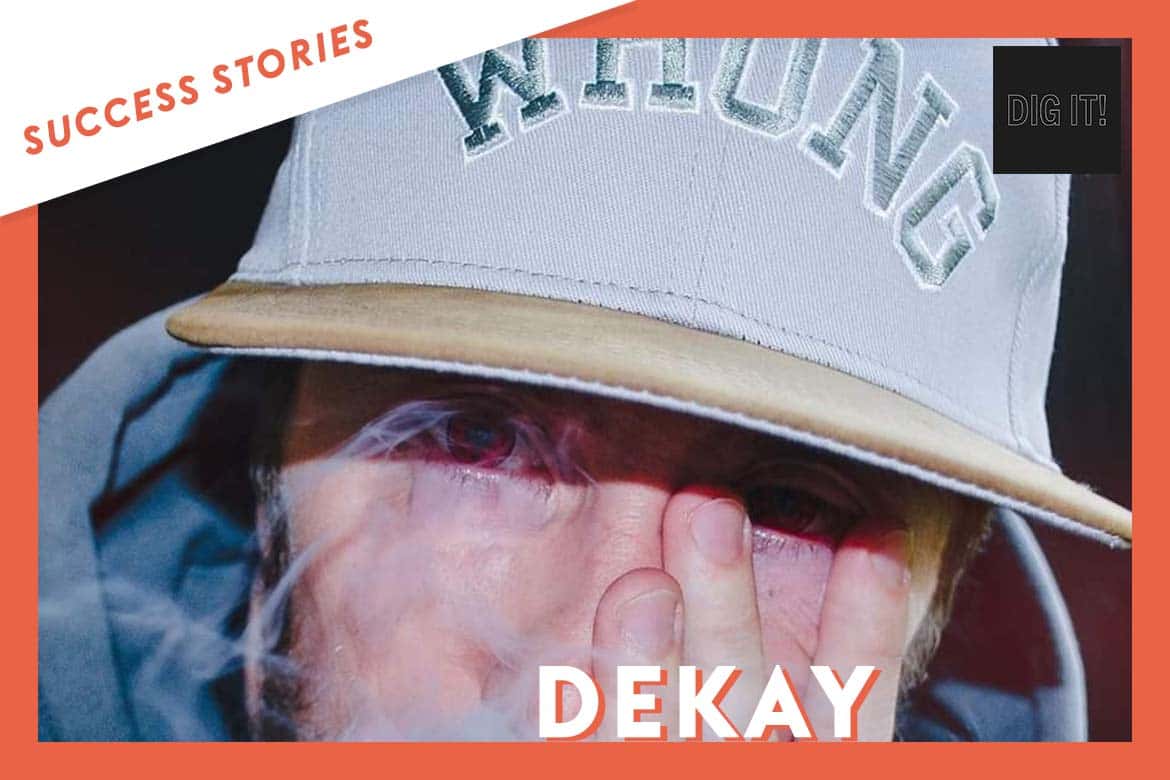 Dig It!, label of Chinese Man Records, has just signed rapper Dekay after discovering him on Groover. We met them for an interview where they spoke to us about their music, how they met and their projects ✨

The first time I heard about Groover, I think I saw an ad on Facebook, I was a bit skeptical at first because the concept seemed new but I went for it and found the idea to be great. You should know that I had been sending emails to many influencers and had no responses however,  through Groover I had my responses within the day I sent them, so that was a big plus. When I saw that Chinese Man Records was one of the possible influencers, it was so COOLLLLLLL.

Dig It! and Dekay, could you present your respective projects in a few words?

Dig It!: Dig It! is a “discoveries” label carried by CMR (Chinese Man Records) which was launched in response to the crisis that labels (and the entire cultural sector) had been undergoing since the start of the COVID situation. The idea is to regularly release previously unreleased digital singles (mainly streaming), to promote and showcase new music and artists with different musical styles less explored by CMR.

Dekay: Hi everyone, first let me introduce myself in a few lines. My name Dekay, originally from Périgueux, a town in the southwest of France. I lived in the south of England from 2002 to 2010 and would make two annual-seasonal stops in Ibiza,Spain and several vacations in the USA. This explains my fascination with the English language and why I rap in English rather than in French.

Dekay, how was your musical project born?

Dekay: I have been a Hip Hop fan for the last twenty years, my world changed the first time I heard Eminem, whom I still listen to to this day. I was part of two groups before going solo, we had a lot of small concerts here and there and a final show at the La Mue springboard organized by the Banzai Lab label in 2018. I released an EP in March 2020: Exposed Chapter 1 and I’m working on Chapter 2 right now.

What are some of your inspirations and what are you trying to convey through your music?

Dekay: I’m very inspired by horror movies (Small spoiler for chapter 2 featuring my good friend MC Jazzzz, we created a sound called Dream Killers, where we basically we get into people’s dreams and …. You can guess the rest). What I’m looking for when I do a song is technique and flow variances. Some influences of mine, of course Eminem, Royce da 5-9, Hopsin, Dax and a few more. I mainly listen to anglophone hip hop, especially US but I particularly like the British label High Focus without forgetting Snak the Ripper from Canada.

I don’t think I’m trying to convey anything through my music, I don’t do conscious rap (What is conscious rap?), I don’t talk about ghettos or drugs, I like to make up stories, to put myself in the shoes of characters, or just to evoke how I feel towards certain forms of hip hop. These days, I rap about the concept of a “celebrity” by social networks or my frustration in the musical world. I had a lot of refusals from labels because of the English language, not because the music was bad but because it would be too hard to promote or sell in France.

What does a trip inside Dekay’s head look like?

Dekay: A trip inside my head, you don’t want to know what it’s like!!!

And what does a day at Dig It! look like?

Dig It !, Dekay is the first musical project you signed via Groover, what attracted you to him?

Dig It!: Clearly Dekay has a rather marked and rather dark universe, we were very excited to receive his first single via Groover (Rigor Mortis). Since Dig It! only releases unreleased tracks, he was asked directly if he had any other upcoming projects … and he did, he was already working on vol.2 of his “Exposed” project. It was his flow that caught our attention the most, and he quickly gained support on the listening committee!

| Check this out: Storytelling: Building a Universe Around Your Musical Project

What did your first meeting result in?

Dig It!: We are a digital label project and due to COVID, our meetings have been limited to digital discussions 🙂 It changes our habits a lot with CMR where we only work with artists that ‘we see regularly and have known for a long time. It is often that human contact and artistic encounter that has prompted us to develop our projects with CMR … however, the situation in recent months has forced us to change our habits a bit. If and when real life resumes, we hope to be able to meet on the road or for future projects!

Dig It! and Dekay, what are your plans for the coming year?

Dig It!: With Dig It!, we have launched our first 3 singles to date (Makoto San, Bavard, Dekay)… and we do not intend to stop any time soon! A dozen titles by French and international artists, more or less developed, in very different styles, are already in the pipeline and we can’t wait to share it all. We feel a real enthusiasm for the project as much with the artists as with the public, it gives us a boost in this unsteady period. We continue to work on the project to make it grow and give the best possible exposure to all the artists that we will release.

Dekay: My plans for the coming year, Exposed: Chapter 2 and a 4 track EP on Intruder Drill and hopefully gigs if the current situation improves.

Dekay: My advice for young artists: Persevere, have your own style, don’t necessarily copy what sells, and not everyone is a rapper or singer or T-Pain !!!! Stop abusing autotune !!

Dig It!: This is a tool that we have been using on a recurring basis for some time now to promote the label’s releases. An interesting tool which has allowed us to get in touch with new journalists, and which has evolved considerably in recent times. The digital side is in perfect harmony with the Dig It! project, and we consult it regularly to make new discoveries.

Dekay: The first time I heard about Groover, I think I saw an ad on Facebook, I was a bit skeptical at first because the concept seemed new but I went for it and found the idea to be great. You should know that I had been sending emails to many influencers and had no responses however,  through Groover I had my responses within the day I sent them, so that was a big plus. When I saw that Chinese Man Records was one of the possible influencers, it was so COOLLLLLLL.

| Check this out: Myoon signs with Electro Posé’s label Inside Records thanks to Groover

If you too want to get in touch with the best labels, media and pros in the music industry, check out Groover