Storytelling: Building a Universe Around Your Musical Project 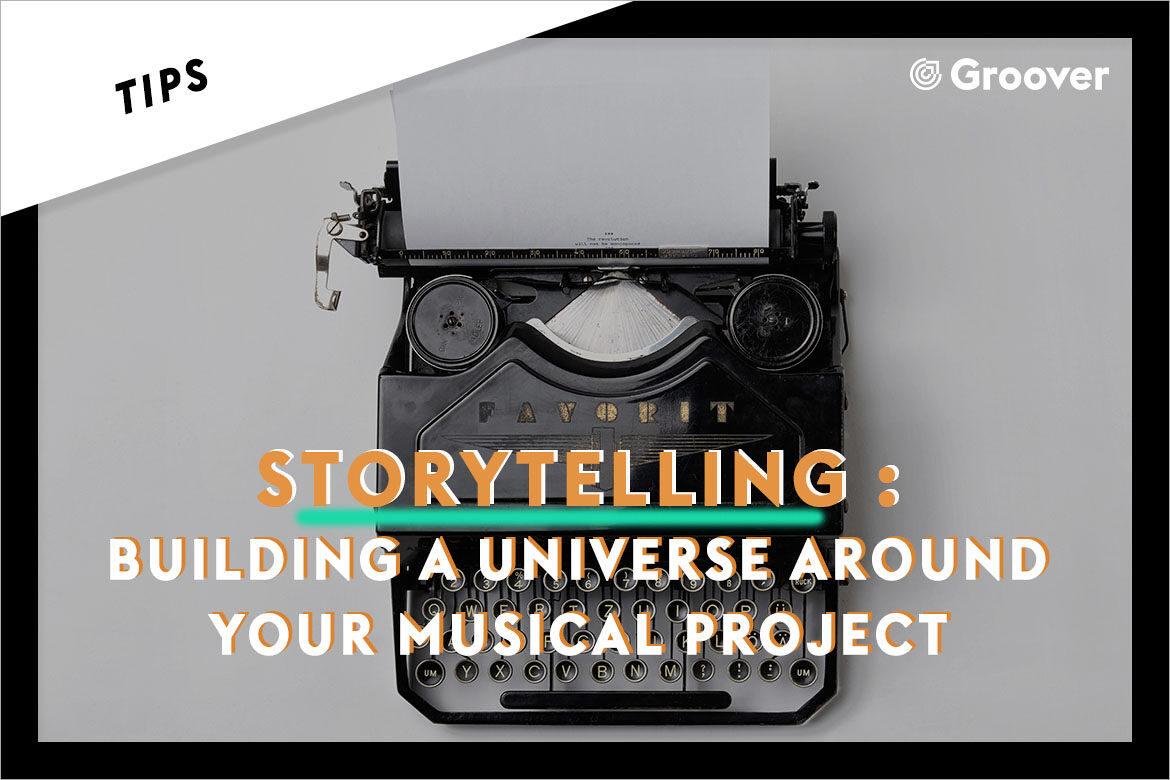 Storytelling is an art. More than just a process, a method, or a technique, storytelling is the art of “narration”.  As musicians, this consists of building a unique universe and telling a story in order to develop communication.

One thing that is often criticized about streaming services is the difficulty of getting music fans to be interested in more than just a song- getting the audience to invest in the personality of an artist and his or her world.

Here are a few tips to make your musical project a unique experience:

Storytelling is initially a process widely used in the commercial world. The purpose is to tell a story about a product instead of directly putting forward the product’s features. When applied to music, storytelling is a great tool to stand out from the crowd.

The art of storytelling allows you to capture the attention of your listeners beyond your music.

Getting your audience involved in your musical project is the most difficult step to take. What you have to keep in mind is that your world is just as important as your music. The art and power of storytelling is all about immersing your fans, touching them emotionally or involving them in the adventure you have decided to tell.

2. The power of storytelling

The most successful artists know the value of storytelling and know how to sell themselves. With 40,000 songs being released on Spotify every day, you have to stand out from the crowd in order to exist.

Think of your musical world as a movie or a novel consisting of several hundred pages. As a musician, every action you take is a chance to move your story forward and make additional connections with your audience. Every concert you play, every video you create, every new song you release, every newsletter you send out, every article that is written about your project is part of your story. And that story stimulates imagination and passion and creates a sense of community between you and your fans.

3. Knowing who you are to know what you want to transmit

Are you an avid David Bowie fan? Or The Notorious B.I.G.? Let it be known. By associating yourself with your music icons, you instantly give the listener something to reference before pressing play.

Your heritage or even just the scene you’re in may be a characteristic of your music and what you represent. Take for example the hip-hop scene in Atlanta, which in 2009 was called the “center of gravity of hip-hop” by the New York Times as the city is home to many famous hip-hop, R&B and neo-soul musicians such as Childish Gambino, Migos, OutKast, T.I., Future and Gucci Mane.

If you choose to incorporate culture into your musical identity, it can bring a supportive audience directly to you.

Your story as an artist and/or individual can sometimes be enough on its own to find an audience. Your personal experiences are part of your story and can motivate people to become emotionally involved and contribute to your success.

4. Building a universe around your musical project

As “the art of narration”, storytelling requires creativity, vision, skills, and also practice. Whether you’re a director, painter, or writer, all artists follow a creative process of their own. This creative process helps them know where to start, how to develop their visions and how to perfect their practice over time. The same applies to storytelling.

The challenge is therefore to know how to juggle between these different platforms because your story can take many forms. Some elements can be read or watched and others listened to. The communication medium you choose depends essentially on how you want to express yourself, as well as on your resources such as time and money.

Also think about the new modes of broadcasting available to musicians such as podcasting, which not only allows you to engage in a more human dialogue with your fans, but also to maintain narrative control over your creations.

5. The transmedia strategy: the example of Gorillaz

Transmedia storytelling is a derivative of storytelling. It consists in creating a universe through various media. The pooling of all these narrative elements aims to create an artistic experience in its own right. This process has existed since the arrival of the Internet (illegal downloading destroying the music industry at the dawn of the 2000s) and was already intended to develop the relationship between artists and their community. One of the pioneers of transmedia storytelling is of course Gorillaz.

Band members Damon Albarn (also known with Blur and The Good, the Bad and the Queen) and Jamie Hewlett created a virtual band with their own universe and their own life. These cartoon characters produce a strong visual identity for Gorillaz. Throughout their clips, the two artists have built a story around the lives of the characters. To promote one of their world tours, the group also organized an online treasure hunt.

More recently, Gorillaz launched an application for the release of their album “Humanz” (2017). This application allows fans to explore the space in “the sacred rooms of the Gorillaz house”, and to discover virtual reality experiments, playlists and a behind the scenes look at the new album.

Among the best known examples of this technique is Daft Punk with the film Interstellar 5555 from the album Discovery (2001), whose universe is inspired by the famous Japanese manga and tells the story of several characters- not to mention the mystery surrounding the true identity of the band’s members.

In the same vein, you can, just like the psychedelic rock band Magon, develop your storytelling in the form of a web series, “Magon The Dragon”, which retraces the highlights of the Parisian quartet’s life.

6. The most important tip: stay authentic

Don’t pretend to be something you’re not. Your audience and the media will see right through you. That said, what sets you apart from other groups? What aspect of your life will connect emotionally with your listeners? How far can your creative potential go? These are the elements that will attract fans and music critics alike. It’s all of these things that need to be at the center of your story.

| To stand out from the crowd, check out CMC Studio’s tips here 👈

To get article coverage and added to playlists to share on your social networks, check out Groover🚀

5 Tips on How to Make Newsletters to Promote Your Music

How to Keep Earning Money as a Musician in Confinement

How to Use Groover to Promote Your Music...

Recording Contract: what to expect and what to...

How to export Slovenian music internationally? Interview with...

How to Get on Spotify Playlists – Groover...