Radio: How to get your songs successfully on the air? 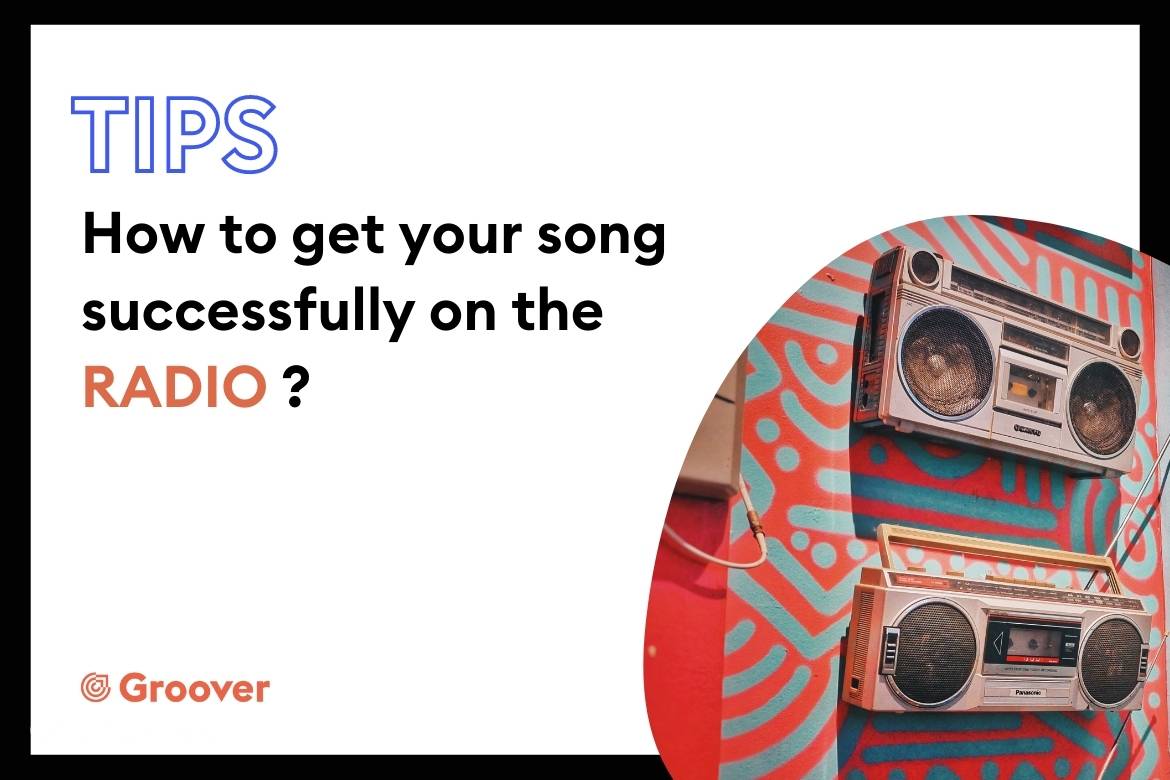 Among the many options available to emerging artists to promote their music, it is difficult to find the methods adapted to their ambitions, needs and means. Getting your music on the radio is a luxury in the recording industry; a music service reserved for artists signed to major record labels or benefiting from a huge network of influence.

However, in recent years, things have been changing, and new alternatives are being put in place to encourage the discovery of new artists – including Groover, which provides access to the best radio stations, media and music-industry professionals with a 7-day response guarantee. Because going on radio stations, broadcasting your songs on FM and getting people to listen and download your music, remains an indispensable lever to propel your career. But how do you get your music on the radio ?

Why is Exposure on The Radio still so Important?

With the rise of social networks and new distribution channels (Instagram, Facebook, Youtube and any other streaming music service), promoting your own music has never been easier or more complex at the same time. It is easy because these options are accessible to everyone. Today, it is possible to distribute all music at a lower price on the main on demand music streaming services. On the other hand, it’s so complex because it’s difficult to set up an effective strategy that isn’t too adventurous and time-consuming… Currently, over 20,000 pieces of new-music are released on Spotify every day and it’s hard to stick out from the crowd without spending a lot of money or wasting a lot of time.

62% of new track discoveries are made via radio, compared to 20% via streaming.

Traditional media such as the press, music blogs or television have lost their allure over the years, and it is no longer as necessary as before to go through them to make one’s music known. On the other hand, in the face of competition from free music streaming platforms, radio remains the main source of musical discovery in popular-music. 62% of new music discoveries are made on radio, compared to 20% on free music services, especially among non-subscribers. Not only is it a great promotional tool but, it’s a great music discovery tool for your potential new audience and expand their music library. Music apps like Shazam allow listeners to listen to your music over and over again on a music streaming service like Spotify, Apple Music, Amazon Music, Deezer, Youtube Music etc.

Where do people listen to music?

Groover presents you with 5 tips on how to get your music heard on the radio and share them to a whole new audience.

1. Have a solid musical project to get your music on the radio ?

Before approaching any music business professional, you must have at least some professionalism yourself in order to stand out and, above all, appear credible in your approach. Refer to the following criteria:

See as well: How to write a good biography?

2. Choose the right single to get your music on the radio

This is the most critical step in the whole process. You must absolutely submit a work of good sound quality. This means that it must have gone through all the stages of musical creation, from choosing the title to composing, arranging, voice recording, mixing and mastering. The challenge here is to select a “single,” a track that is both representative of your musical universe and that also has a strong potential for listening, and therefore, for the audience. More simply, it is your “big hit.”

Another essential element in maximizing your chances of getting on the radio is the length of your song. To do this, your track should last between 2min30 and 4min. Beyond that, your chances of getting on the airwaves are often limited. Of course, we do not advise you to restrict your artistic creation. On the contrary, you must extend and express your creative potential to the maximum according to your desires and according to your own rules.

Taking risks and experimenting will help you to assert yourself as an artist. On the other hand, we recommend that you produce a “radio edit” version of your single if necessary. This means that it is a version specially adapted for radio broadcasting, respecting the duration format and excluding any obscene or shocking aspects. This version is also very often used for music videos. One of the most famous examples is Daft Punk’s One More Time, whose radio edit version has a radically different structure than the album version.

Think of quotas- if you have one song in the language of your country, you’ll have a better chance of getting it onto national radios! Yes, it’s true. It’s a criteria you have to take into serious consideration if you want your music to be played on the radio. For example in France there’s a quota imposed by the CSA which is designed to protect French-language music from the invasion of Anglo-Saxon pop songs that are flooding the airwaves.

The law of February 1, 1994 requires private radio stations to broadcast, since January 1, 1996, at significant listening hours, 40% of French songs, at least half of which must come from new talent or new productions […].

By French-language song, the CSA means any work with a text performed or recited primarily in French or in a regional French language. And by new talent, any artist who has not yet obtained two separate gold record-certified albums.

5. Choose the right radio and opt for new networks of influence

Every radio station has its own audience and therefore has a musical genre of reference. The radio station you want to present your music to is therefore also an important choice. For example, it is useless to go and propose a hip-hop track to a radio station specializing in indie music. Your music must appeal to the Djs on the radio service. Choose radio stations that play music in the same style as yours. If your track covers multiple genres, reach out to all of those different stations to optimize Radio airplay. Submit your music to the relevant stations in the appropriate way to maximize your chances of being played.

Fewer and fewer people are listening to radio in its traditional (over-the-air) form and a whole new form of online or internet radio is gaining momentum and providing a new outlet for emerging artists. An online music player like Soundcloud is a perfect example of how one can listen to music online and discover new music. This allows for a whole new way for listeners to not only listen to your music it but save it and stream music offline (playlists, downloads, streams, etc). Thanks to an efficient and particularly affordable concept, Groover offers you the opportunity to contact the best radio stations, media and labels of your choice with the guarantee of being listened to, receiving feedback and visibility!

In addition to this direct contact via the platform, Groover has had an official partnership with Radio France for several months now to simplify the discovery of the most promising talents on Groover and to act as a real springboard for your music career. 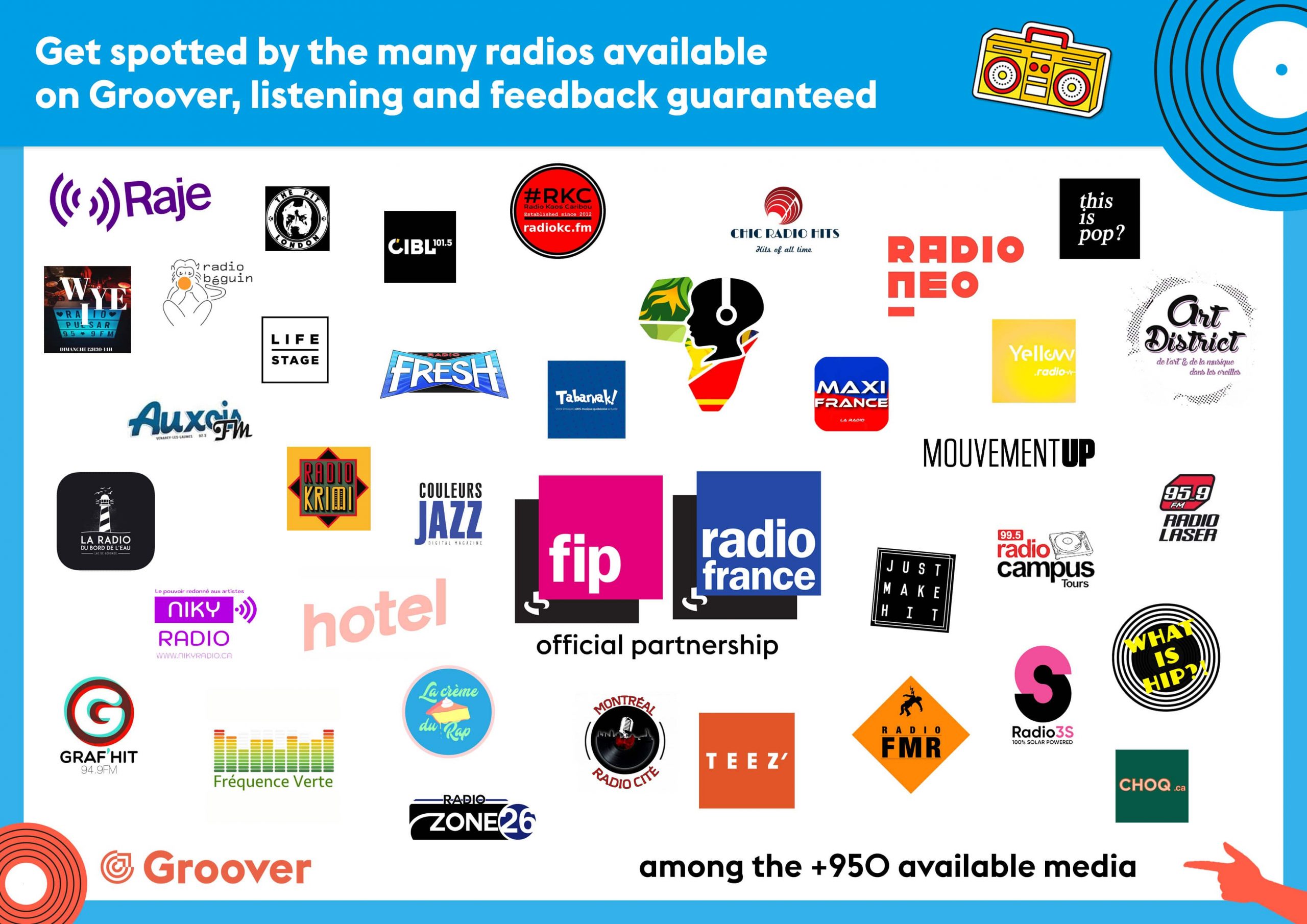 Get yourself noticed by the media, radios & labels of your choice on Groover, feedback guaranteed!

How to make your streams take off on...

How to use Spotify for Artists to develop...

How to play piano well?

[…] answer is in the stats. 62% of new track discoveries are made through radio. This is in comparison to only 20%, which are made via streaming platforms. Therefore, if you want […]