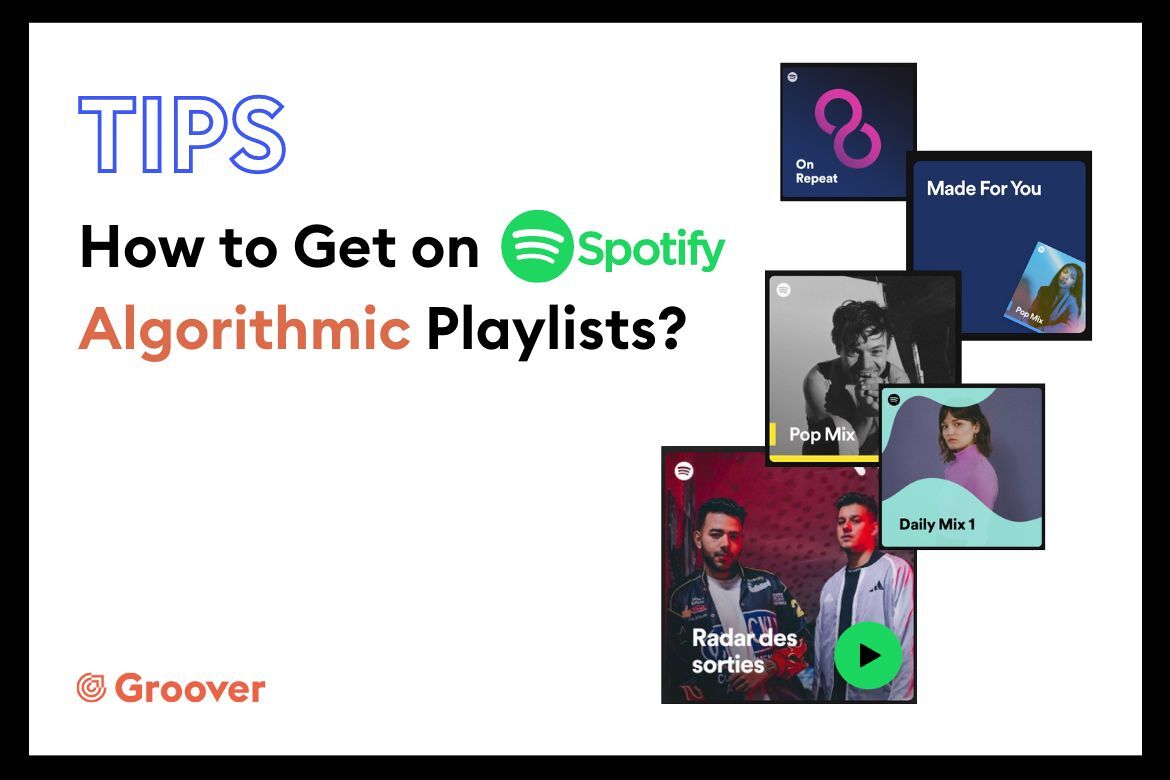 1. Types of algorithmic playlists on Spotify

Are you looking to get your music into Spotify playlists? ⬇️

Daily Mix is the Spotify algorithmic playlist updated daily that contains songs or artists a user already listens to. The algorithm examines listening patterns and creates up to 6 different playlists that are grouped by genre or mood. As you can see in the example below, similar artists are regrouped in each playlist.

Discover Weekly is the Spotify algorithmic playlist that contains music the listener has not yet heard of. This playlist is updated every Monday. Unlike the Daily Mixes, Discover Weekly is really about discovering new songs that are similar to a user’s listening habits. If a listener likes indie pop and chill music, they will not find heavy metal on their Discover Weekly playlist. The playlist is curated to present you with the best music similar enough to what you’re listening to already but that you haven’t yet discovered.

Release Radar is the Spotify algorithmic playlist that includes new releases from artists that a user follows or listens to. If listeners are following your artist profile, your music will automatically show up in this playlist when it is released. Release Radar is updated every Friday.

On Repeat is the Spotify algorithmic playlist that compiles the favorite songs that a user has been listening to most over the past 30 days. It combines genres and moods and regroups songs that the listener has been playing nonstop.

Repeat Rewind is the Spotify algorithmic playlist that is similar to On Repeat, except that it goes further back in time. It compiles the user’s most played songs from further than just a month back.

Spotify Radio is a collection of Spotify algorithmic playlists that are generated on the spot by a user by using any other song, artist, album, or playlist as a starting point. Users can click on the three little dots next to a song, artist, etc. and be led to a personalized Spotify Radio playlist containing around 50 similar songs.

Your Top Songs is the Spotify algorithmic playlist that contains the top 100 most played songs for a listener in that calendar year. Listeners can see their statistics and listening habits from a whole year using this feature of the Spotify Wrapped campaign.

2. How to get on Spotify algorithmic playlists?

2.1 Invite your friends and listeners to follow you on Spotify

When a user is following your profile, your new music will automatically show up in their Release Radar playlist. This is the easiest way to be placed in an algorithmic playlist. It also is a simple technique to keep your community up to date with your project! You can incite fans and followers to pre-save your track even before it is released so that it automatically appears in their Spotify library as soon as it comes out.

2.2 Pitch your songs to listener playlists

Getting your songs on playlists curated by other listeners can boost your chances of landing in an algorithmic playlist. When your music starts to be associated with other artists, you could end up in the Discover Weekly and Spotify Radio algorithmic playlists. The best way to pitch your songs to influential listener playlists is by using Groover: an innovative platform that connects artists directly with influencers in the music industry with a response guaranteed.

2.3 Boost streams to your song from the moment it is released

Spotify’s algorithm notices when songs are getting attention. The quicker a song gets streams, the more streams it will get. The best thing you can do is to promote your song as much as you can from the moment it is released. Share it on social media, send the Spotify link in personal messages, and encourage friends to do the same. The more other people share your song, save it to their profile, and add it to playlists, the more attention it will get from the algorithm.

One way to increase your chances of getting onto Spotify algorithmic playlists is to release music regularly and keep your audience engaged. The more often you release new music, the more likely your listeners will come back to your profile and stream your tracks. It’s becoming more and more popular to release singles nowadays. This strategy creates a snowball effect that keeps the inertia of a project moving forward.

3. How long does it take to get on Spotify algorithmic playlists?

Your new releases will usually show up on the Release Radar playlist on the Friday following its release. If you release your music on a Friday, it should show up automatically in this playlist on the same day. For the other Spotify algorithmic playlists, it can take a couple weeks for Spotify to gather sufficient data to place your new track in the other algorithmic playlists.

If you already have a substantial following and your Artist profile appears on other artist’s “Fans also like” section, the chances that your song will be placed in algorithmic playlists are much higher. A new artist that has just released their first song won’t have the “Fans also like” section on their artist profile because Spotify hasn’t had enough time to collect user data from their listeners. Once you start getting a sufficient number of streams on your music and thus listeners, the algorithm will identify similar artists that your fans are also listening to. With enough traffic on your profile, you’ll be able to be associated with similar artists and potentially added to algorithmic playlists.

4. How do you trigger the algorithm on Spotify?

The Spotify algorithm plays a big part in whose music rises to the top. There are certain techniques to keep in mind if you want to trigger the algorithm on Spotify and have it work in your favor.

4.1 The first 30 seconds of your song matter

4.2 Confirm and customize your Spotify for Artists profile

If you’re just starting out, make sure to confirm your Spotify for Artists profile. Once you have claimed your profile, you can customize it with photos and a biography. This is important to build your project and identity but also to show Spotify that you are active on the platform.

Spotify has created tools like Canvas to add visuals to your music. These customizable moving images can help to engage listeners and add another dimension to your musical universe. Check out our full article on how to use Spotify Canvas here.

4.4 Pitch your song to editorial playlists through Spotify for Artists before your release

4.5 The first 24 hours following your song release matter the most

When a song is released, the following 24 hours are what matter the most to the Spotify algorithm. If there is enough traffic on the song within the first 24 hours, the algorithm will boost it. Getting streams, shares, saves, and added to playlists right off the bat will increase the data on your song and thus boost it.

One of the best ways to trigger the algorithm is through playlists. When your song is added to lots of listener playlists, the algorithm notices. The algorithm is meant to keep listeners listening, and when your music is shared on playlists on Spotify, you are contributing to the endless flow of music available to Spotify’s users.

Now that you know how to get on Spotify algorithmic playlists, go ahead and contact playlist curators on Groover ⬇️

HOW TO BECOME AN INTERMITTENT ENTERTAINER AND WHICH...

Artistic Director: What is the role of an...

5 Keys to Success on Patreon: Tips for... 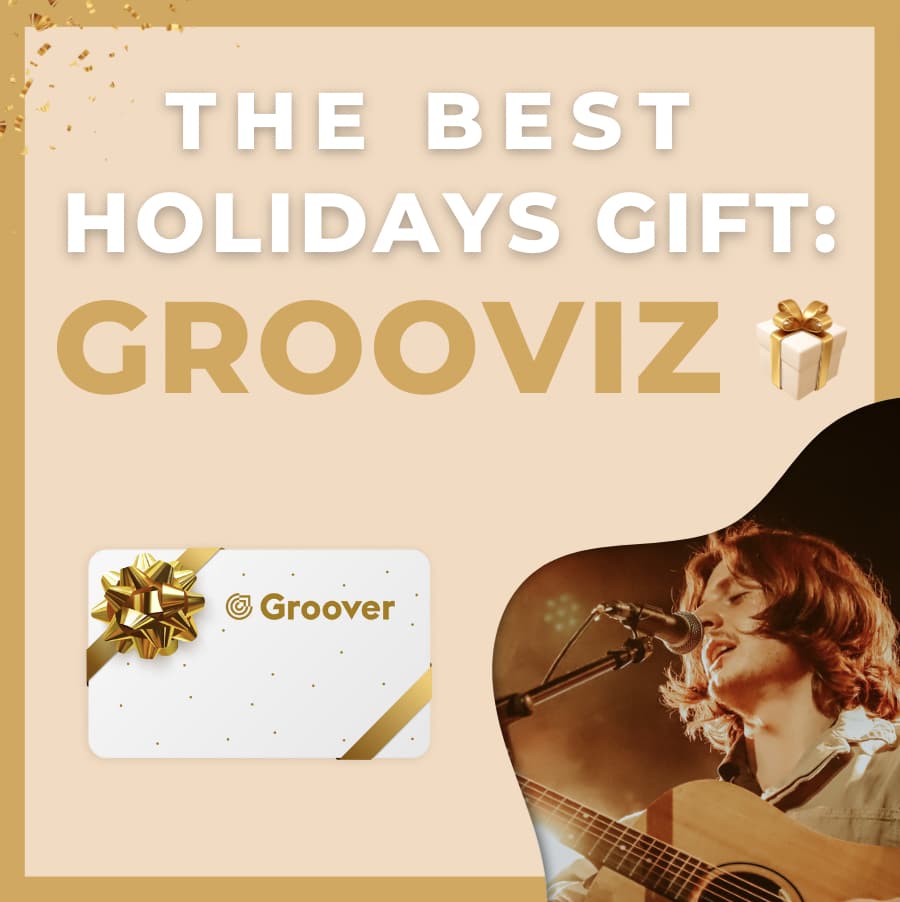