Viratempo promotes a new project internationally thanks to Groover 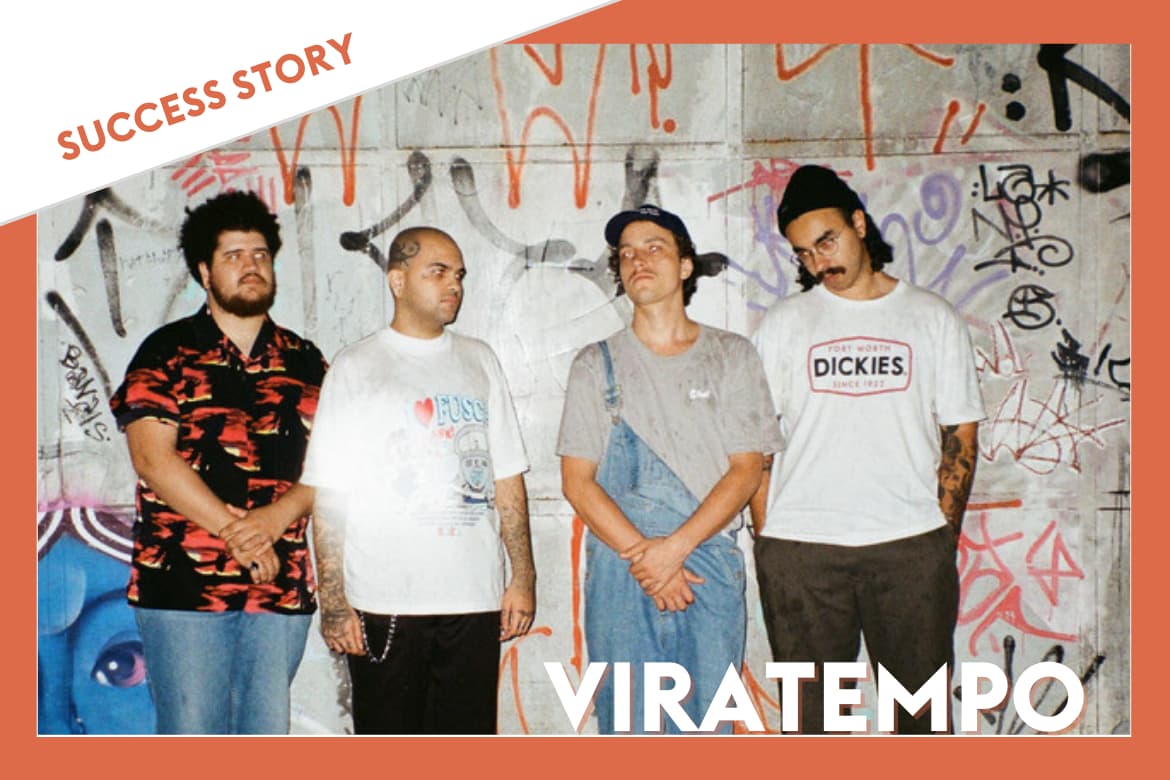 We recently met Viratempo, from Brazil, who have been conquering a growing audience within the alternative scene. Mixing elements of dream pop with various influences, the quartet is bathed in a pop instrumental and a sweet voice. In their most recent work they released an EP of re-readings of their own songs, the AUTOCURA EP.

We had the pleasure to ask them a few questions about their project and about the international impact Groover had in promoting their latest work.

Groover brings hope to a generation of artists that are emerging worldwide. With all the new technologies, Groover came to help both artists and music professionals.

Viratempo, could you tell us about yourselves?

We have been friends for a long time, some members studied together and others got to know each other through the shows we used to do with our first high school bands. We are a Brazilian band from São Paulo. Our project started when our vocalist Gabriel Valladão presented some compositions at the end of 2014. We have gone through some changes in the last few years. Since our first album, the band has crossed several musical aesthetics, predominantly dream pop, but there are trip-hop, lo-fi, MPB, R&B, soul and disco influences.

Your visual identity is a hallmark of the band, can you tell us a bit more about it?

For us, visual identity is as important as the music, we believe the two go hand in hand. The visual language is such a strong way of expression, that we like to work and pass our ideas and concepts through it as well. All this work is elaborated by the band, but it also counts on the work of many of our friends who are immersed in the artistic universe. For example, all our clips were produced by friends who, besides advertising work, seek to work with independent artists. This makes our visual identity also a collective work, which always allows for a good dose of freedom and determination. 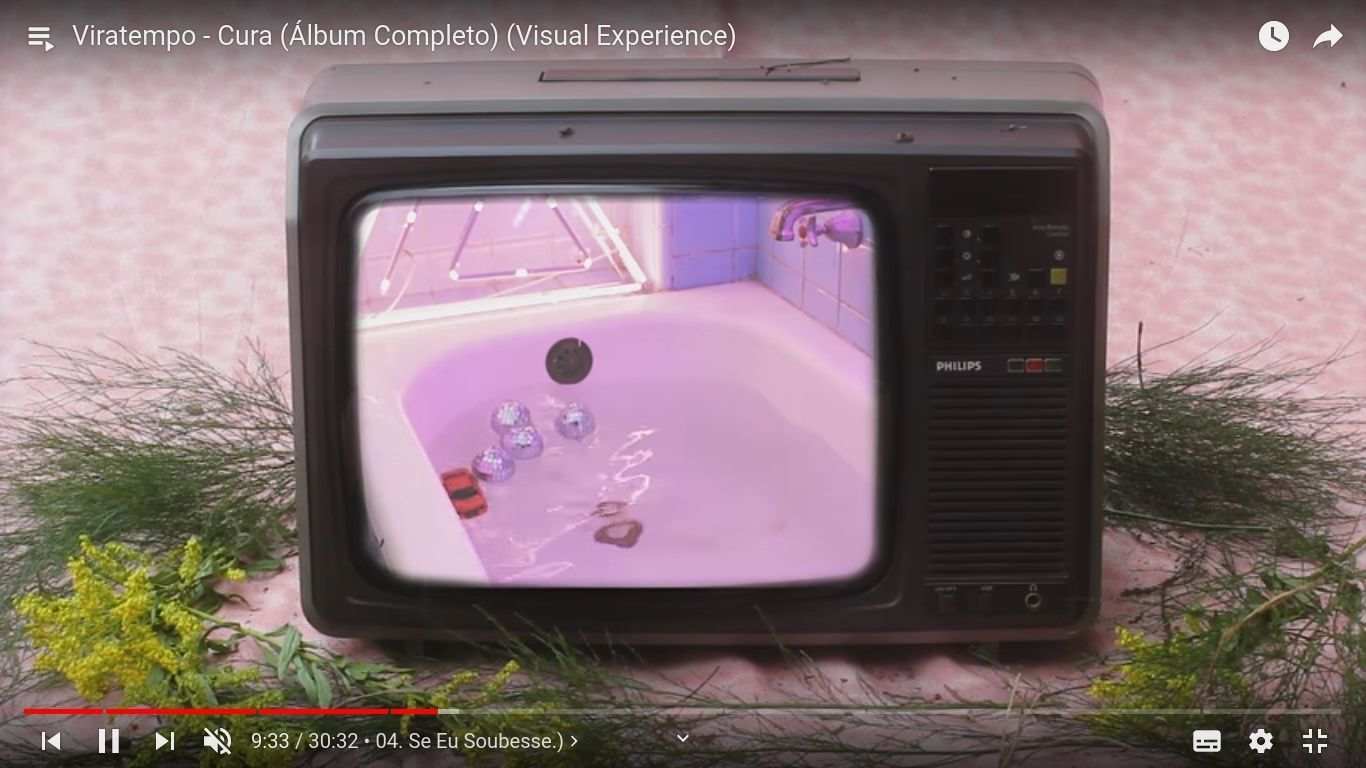 Viratempo = Visual Experience from their album Cura on Youtube

What are the inspirations for making music in a period without shows?

We have always been very self-sufficient in the creative process of making music. We have always created songs individually and then put them together in rehearsals and in the studio, so the process has stayed pretty much the same. We are taking advantage of this no-show period to write and produce new songs and concepts for future work. In the last two years a lot of things happened that gave us more structure and freedom to think about ambitious projects. We met incredible artists and musicians, producers, and now we are part of the Freak label (who is also an influencer on Groover).

| Check out all influencers available to you globally on Groover!

The album “Cura” has just passed the mark of one million streams on digital platforms. How does this achievement make you feel and what does this change for your career?

We can already say that we didn’t become millionaires hahaha. We are always very happy to know that each play is a new listener or someone who is listening to our music on a loop. The album Cura is like our first child, it took two years of work, it was produced and released independently, so just getting it out into the world was a personal victory! In terms of career, it brings more visibility. We know that the number of plays and views is a kind of showcase, especially for concert producers, festival curators, and market professionals in general. Like it or not, it reflects in some way the digital reach of your music.This certainly brings us many new opportunities!

You made a campaign with Groover promoting your sound outside of Brazil, but you sing in Portuguese. What was the goal with this?

In October of last year, we released the EP AUTOCURA where we sought to produce versions of songs from the CURA album by inviting emerging national and international artists. When we discovered the platform we saw that there were many influencers based in Europe: radio stations, playlisters, digital media…

As we have a song called “MEMORIES” feat. AKAN, 4dadasuicide e Kandieiro that counts with the participation of rappers from France, England and Mozambique, we knew it would be a good strategy and help us stick out in a busy market. We decided to send our song to Groover and it got into several playlists and radio programming from several European countries.

| Check out: Atalhos, the Brazilian duo, gained visibility thanks to Groover

What are the plans for this year?

The year 2021 for Viratempo will be a year totally focused on creation. We are immersed in a creative process, writing new songs and aiming for new releases. But we are doing everything very calmly. People can expect new work this year!

Patience and persistence. Being an independent artist is not easy anywhere in the world, especially in Brazil. When we started the band, we wanted everything to happen in an intense way, but we discovered that the greatest intensity is to feel that the evolution comes little by little and with hard work every day. Don’t stop working on your songs, your contacts, social media, and go for it! We are all in the same boat and we’re all learning.

And finally, what do you think Groover can bring to the music industry?

Groover brings hope to a generation of artists that is emerging all over the world. With all the new technologies, Groover is here to help both artists and music professionals. The platform helps to weave real links between artists and influencers in their musical niche. This will boost the careers of many people, we are sure!

Send us your music and get in contact with all types of media and pros!

How to monetize your work as a musician: A clear guide to avoid underselling your music