Atalhos, the Brazilian duo, gains visibility thanks to Groover 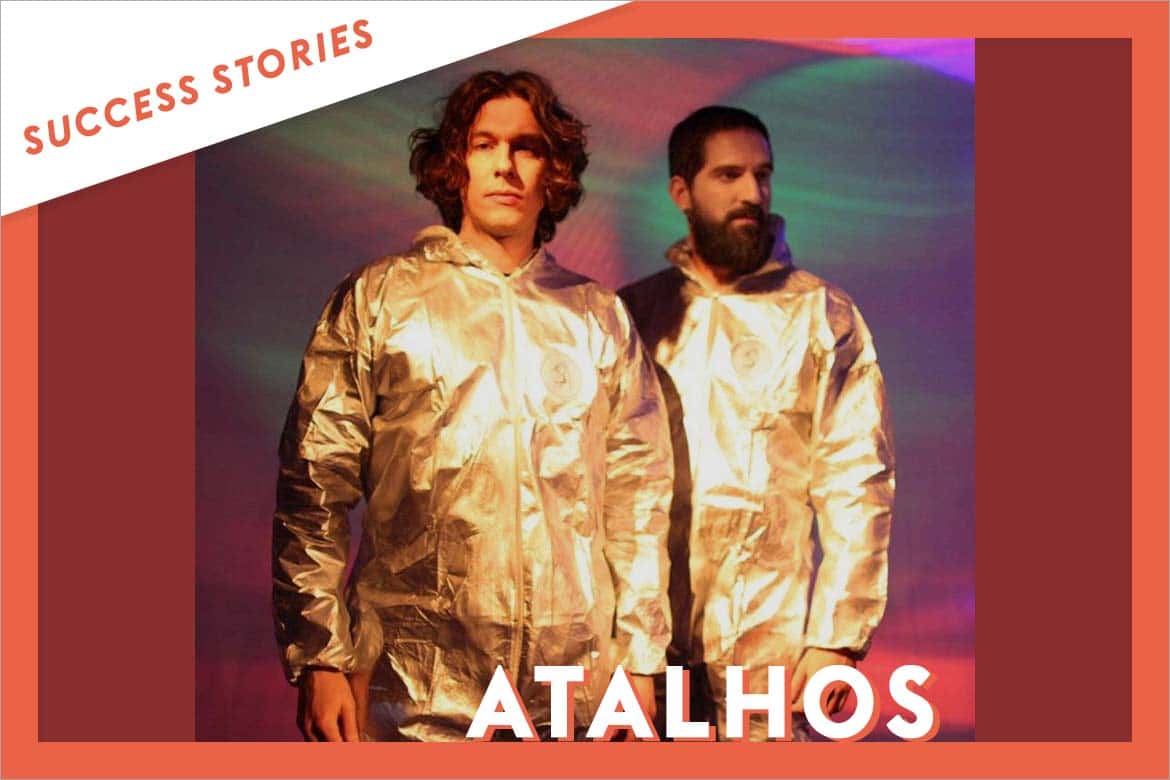 We met the dream pop duo Atalhos, from Brazil. A solid and authentic project to follow closely for these two lovers of music, literature and cinema. And what a pleasure to read these words, to know that Groover has such an impact on such beautiful musical projects. Caring, intelligence, opportunities and strength are really what we want to bring to the artists, and it’s wonderful to see that it works so well.

It really helped me to reach the curators and influencers, but most important is the human thing besides. Groover gives the opportunity for the artists to be listened with attention and careness.

Atalhos, can you present your musical project?

Well, we are a Brazilian duo very connected with literature and cinema and we try to put these influences in our music, especially in the lyrics and in the titles of the songs, but also in the way we present ourselves in the videos, photos, and in the social media. We used to be a band more related to folk music, however we’ve been working for the last two years on our new album and that brings us to a new musical universe, I guess we are more like a dream pop band now, favoring the electric guitars, the synths and keys, and the particular effect we’ve created for the vocals which help us to build this dreamy atmosphere.

I was born in a small town in the state of Sao Paulo, and I learned how to play an instrument when was in high school, and reunited some friends that were in the same thing, and we just formed a band to play covers, especially songs from the bands we used to listen in that time, like Nirvana, Alice in Chains, Bush… we were very grunge hahaha. And after that, I felt this necessity to create my own songs and started to write and to compose. When I finished high school I moved to Sao Paulo and began to study Journalism. That’s when I first knew a professional studio where I worked with my bandmates and recorded our first album, and I guess that’s when we became a real band, you know, with an album full of proper songs, and that’s when all began to be more professional.

You have a very strong universe, what are your inspirations?

I’m happy to hear that because we try to be very authentic and to put very clearly our influences and inspirations and I think we are being successful on that. I and Conrado are addicted to literature and cinema, and we love to put some of the references on the songs, but also in our posture in the social media, in the way we communicate with our fan base, we always talk to the fans about the books we are reading, our favorite writers like Marcel Proust, Sartre, Simone de Beauvoir, Camus, Heidegger… I also write often in our blog, and is all about creating and building this universe that just doesn’t end with our music, you know, we love to enlarge the whole experience that involves music, literature, cinema, we put a strong universe, as you said, in our video clips, photos, etc. I guess it’s what all is about… not just making songs, but trying to create this universe where people can enjoy not just our music.

| Read also: How to build a universe around your musical project?

What’s it like to have a musical project in Brazil?

It’s much more difficult compared to rich countries, but in art when you have this kind of difficulty you can transform it, I mean, you can use it in your favour, it could help you to be more fightful, like said Nietzsche, you become stronger in adversities, so having a musical project in a country that doesn’t support the musicians at all, specially with this kind a president we have nowadays, its a struggle, but it makes you more confident in yourself, it makes the victories also more pleasant.

You sing in Portuguese but are you planning to export your music internationally?

Yeah, I think that singing in English would be the normal thing to do when a band wants to export their music, but as I was saying, I believe that singing in Portuguese give us this authentic thing we’re looking for, it gives us something different and special, and obviously we don’t want to be like everybody… I don’t feel comfortable singing my own songs in English, but to be honest, I guess the most important is the language of the music, the melody, you know, when I was a child and didn’t know a word in English I used to enjoy so much the songs in the movies etc and sometimes is better not to know the lyrics hahaha. When you don’t know what the singer is singing but you love the melody, you love the vibe, there’s much more space for the listener to complete the experience, to imagine, to be part of the creation as well.

I love the cloudy days, cold days… it’s a bit strange to say that being a Brazilian, I know, but I love when a day is born very sunny, hot day, and in a moment the sky becomes grey, dark, and all of a sudden a big storm falls from above. I love the potency of the thunders, these monstrous sounds, and afterward, the sky is calm one more time. I guess a day with Atalhos should have these transformations, moments of anger, power, but also some tenderness, some blue sky after the storm.

Atalhos, what are your plans for the coming year?

We’d love to travel a lot playing our music and promoting our new album that may be released in the first semester of the next year. We have plans to go to Argentina which is the country of our label, we’ve been in contact with many artists from there, and also we wanted to prepare a tour in the US and Europe. I hope we can have a vaccine soon.

Atalhos, what would be your advice to young artists in development?

I’m not good on advices to be honest. What I do believe is the power of learning, studying the things you’re in, investigating, and working hard on things that are important to you. I think being authentic is very important, not try to be someone you’re not, just to fit in. It’s very crucial to know the game you’re playing, but the most important is not to forget who you are. Create music from the heart and work hard to understand the music business and the best ways for you to reach and build your fan base.

And finally, what do you think about Groover? 🙂

I’m an enthusiast of Groover since the day one I discovered this platform. It really helped me to reach the curators and influencers, but most important is the human thing besides. We are living in a society of abundance of information, as said the philosopher Byung-Chul Han, this kind of hyperculturalism sometimes makes us feel like zombies in the middle of so many informations, some many songs that are released every day… and I think Groover gives the opportunity for the artists to be listened with attention and careness. I’ve received so many good feedbacks that really taught me and helped me to improve my consciousness about my own music. And I’m not talking just about the “good” feedbacks, but especially the feedbacks with solid critics, very human and real stuff, and this is, in my opinion, the triumph of Groover, you know, to make possible the real communication between the artist and the critics (journalists, curators, influencers) and it will help so many artists to understand better their songs, their career, it will help us to know better what we can expect from our songs, and most important, it will bring us to reality and make us deal much better with our expectations and prevent possible frustrations. I highly recommend Groover to my musician friends and I hope Groover continues to make possible this encounter of human beings that really love music.

If you, too, would like to get constructive feedback and gain visibility, try Groover now

How to export Slovenian music internationally? Interview with SIGIC