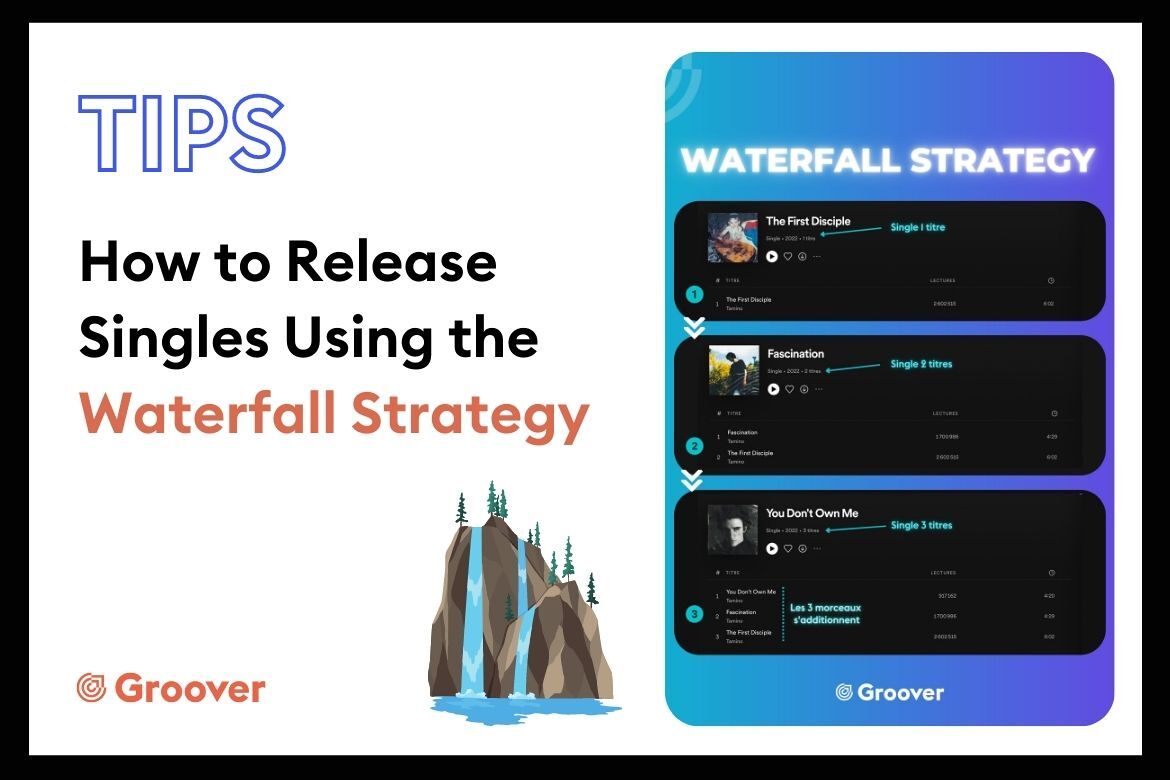 There has been a lot of talk about the waterfall strategy. Although many independent artists and music professionals use this technique, the term is not yet widely used in France.

The waterfall strategy is a release strategy characterized by the successive release of several singles in order to get more visibility on streaming platforms. This strategy is even encouraged by Spotify!

In this article we will explain in detail what the waterfall strategy is and how to use it in the right way, step by step.

1. Advantages of using the waterfall strategy

There are many good reasons for independent artists to use this release strategy:

⚠️ Important: These advantages apply to all artists.

The waterfall release strategy works so well because Spotify uses artificial intelligence and has powerful algorithms to understand trends and what releases get the most streams. With all of this data stored, the platform analyzes the behavior of its users. The waterfall strategy proved to be the most successful way that Spotify was able to make the most revenue possible.

The first step in implementing a waterfall strategy is to plan your upcoming releases. To get organized, try writing everything down in a calendar or use free platforms like Trello and Notion. Trust me, setting up an effective timeline will make you less anxious about your musical career.

2.1 Example of a waterfall strategy

Here is an example of a waterfall strategy so that you can better visualize how it all works:

You’ve finished recording your album with 10 unreleased tracks and you’re already working on planning your releases. Are you afraid that your release might be a flop? That’s normal! Every artist feels the pressure when it comes to releasing new music. That’s why Groover is here. We allow artists to take control of their own music promotion. By being able to contact media, playlists, and labels with the guarantee of being heard and receiving a response, artists are now changing the game themselves.

We all know that with the evolution of the music industry and the music market, an album release has become more symbolic than anything else. It is not necessarily the album release that will bring more visibility, but the strategies implemented!

Let’s say you want to work on promoting 3 tracks before releasing your full album. The first steps are:

The great thing about this waterfall strategy is that with each new single released, the previous single is added to the same entity on Spotify, thus forming a multi-track project little by little.

Objective: Increase your chances that the user will listen to all your songs.

This is just an example. You can also do this with more than just 3 singles!

There are also many artists who use this strategy without necessarily having an EP or album to release later. This can also work, it just depends on your audience.

If you are more of a rap or pop artist, this could be an interesting choice. Whether you’re an indie or experimental artist, an EP/album is always something that fans welcome and look forward to.

Using this release strategy allows you to stay active in the music scene and to bring something new to your fans on a regular basis. It’s also great that you can create post-release content for each single:

2.2 Important details about the waterfall strategy

The hierarchical order of the songs in the waterfall strategy will allow the first single released (Single A) to have a greater exponential growth of streams by simply appearing at the top every time you release a new track. It’s like re-releasing your singles with each release. This happens most of the time, but of course, your other singles could end up generating more streams than single A.

Keep in mind: releasing three standalone singles does not bring the same results as the waterfall strategy!

⚠️ Important: The fact that the singles keep adding up is essential for you to get the best possible results.

Technical tip: to ensure that you get the overall accumulation of listens on a given single, it is essential that you fill in the same data (ISRC and audio file) for each track when uploading singles to Spotify.

The technical part is very simple, you just have to choose ‘single’ as output format and add the file of your new single as well as the one of the previous one. You have to be careful to use the same file, the same ISRC code, title, and contributors to get the streams.

Some tips to avoid technical problems:

To optimize this release strategy, we also recommend that you:

Add it all up and your waterfall strategy will surely have an even higher success rate. Don’t forget to tell us what the results were! We’re always available at www.groover.co, via email or on Instagram.

Understand how to promote your music via Groover 👇

There are more than 100,000 songs released every day on streaming platforms. It’s a reality we can’t avoid: the digitalization of music puts independent artists and music professionals in a constant challenge to stand out from the competition.

Spotify is a platform that dominates the music streaming market and has the power to dictate how often artists should release their music. We know this is not healthy for the careers of independent artists, as many artists do not have the financial and creative capacity to release their music non-stop.

However, it’s worth taking the time to properly plan and implement your own waterfall release strategy. Like it or not, the majority of your audience and music professionals will listen to your work via Spotify. That’s why it’s important to understand the platform and its intricacies to grow your fanbase and get the attention of music professionals.

Use Groover to spread your music around ⬇️

How to Get Your Music Heard by Record Labels

Tips and Tricks to Maximize Your Chances of...

How To Add Lyrics To Spotify