Produce your projectTips for musicians 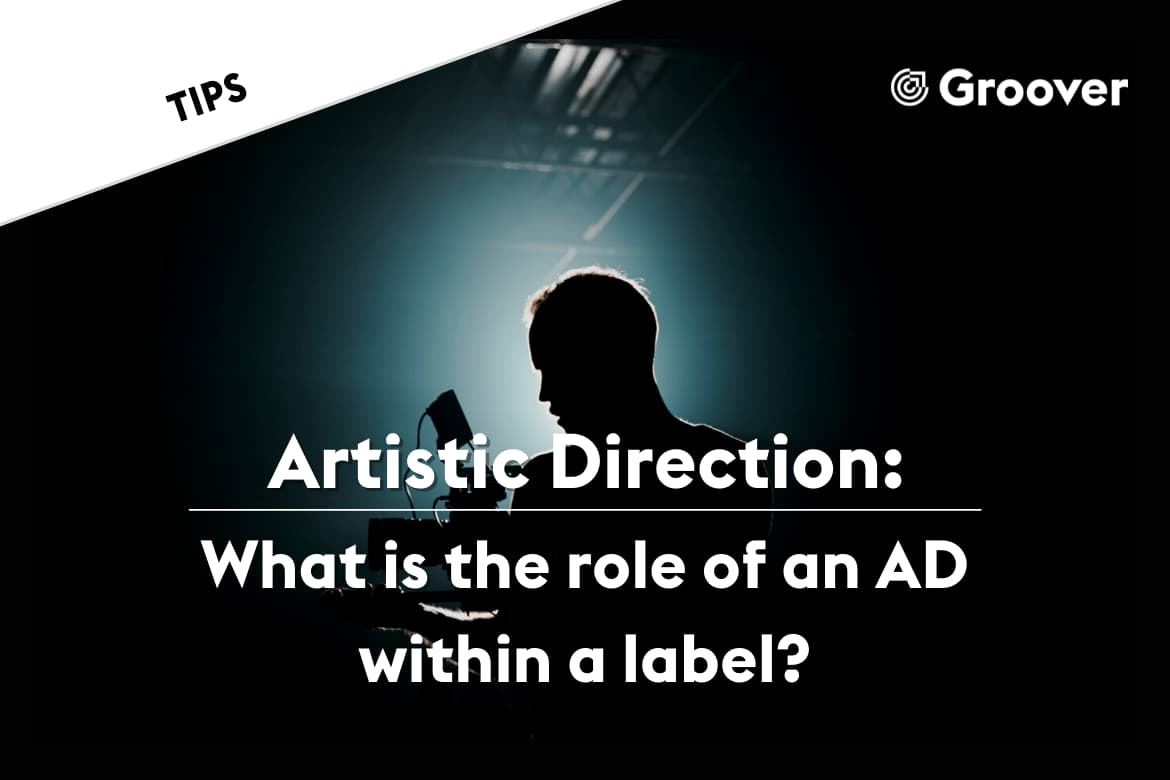 During our 11th episode of our Groover Tips Podcast, our guests Allebou (independent rapper) and Pauline Raignault, (A&R at Red Bull) discussed the subject of “artistic direction” alongside host Ismaël Mereghetti. This article summarizes the highlights of the episode and delves further into the role of an artistic director, a key figure in the music industry. To listen to the episode, click here 👈

You can use Groover to receive guaranteed feedback on your music, build your team and expand your visibility (radio appearances, Spotify playlists, articles, etc.).

The Artistic Director has an external look at a musical project and offers a third-party vision.

In labels and especially within the majors, there’s now a merge between:

2. What kind of advice does the artistic director give?

Different kinds of advice are offered by artistic directors. They can, for example, suggest to rework a chorus on a song, to release a certain song as a single and or they can also decide the ordering of tracks on an EP or an album.

Pauline Raignault, for example, says that she really advised Bigflo & Oli to keep the element of rap battles in their music because it shows their true artistry and showcases what inspired them to start their careers in the first place.

3. How to find the balance between the vision of the artist and the AD

There is nothing better than dialogue!

Pauline Raignault : “I am a challenger for artists but the artist must be able to make their vision be understood and be convincing”

Indeed, there is a balance to be found between respect for ones desires and the vision of the artist, and the artistic direction, which acts like a sort of cushion to fall back on. The goal of the Artistic Director will be to do everything in their power to guide the artist in the development of their musical project, thus allowing them to achieve the objectives they had set for themselves.

This collaboration can scare artists who are afraid of being forced to do things, but we really have to look for compatibility within the work. It is crucial to choose the right working partners and especially when it comes to a record company which becomes the representative of the artist in front of the digital and physical world. Before making your choice, you must learn and spend time with the people who will work on the project. This requires meetings and discussions that will allow you to get to know the Artistic Director personally; this will allow you to decide whether or not your ideas are compatible, if they truly understand you and your artistic vision, if they have the rights connections to help you reach your artistic goal.

| Check out: Recording Contracts: What to expect and what to avoid!

Allebou relays that he feels the need to have the outside opinion of an artistic director because, according to him, an artist can feel alone in his/her vision. The Artistic Director will help give you direction in both the sound and the image.

Pauline Raignault : “This is what you have to ask yourself when looking for an Artistic Director: what is it that they will bring to the table that I alone would not be able to do”

4. Why are the images inseparable from the sounds within a musical project?

The image of a musical project is a very important element for the career of an artist. It is what allows the public to identify and visually relate to the musical project. We must explore all these elements, although the music remains the priority. If there is too much going on in the image of the musical project, one could be distracted from the auditory experience  and/or the project itself is lacking that essential auditory identity. Betting everything on the image could work for a ‘one shot‘ but will not be enough for the long term. In a musical project, it is therefore necessary to work as much on the sound identity as the visual identity.

5. How to reconcile the identity of the artist and the long-term vision?

Nowadays, we try to work with artists over the long term. There are far fewer ‘one shot’ goals where an artist’s contract is for only a single use.

Rather, the trend now is to be a signed artist (an artist contract will be a minimum of 3 years).The Artistic Director will therefore ensure that they can carry out a minimum of projects over the 3 to 5 year period with the artist, otherwise, they will have no interest in signing the artist in the first place.

The role of the Artistic Director is to explore what can happen next and understand the background of a musical project. There is a real importance as to the depth of the artist: does the artist propose a surface level work or do they manage to indulge in their personal life and live each of their interpretations.

6. What other elements is the Artistic Director responsible for?

For Pauline Raignault the most important points are:

She compares this assessment to a SWOT that summarizes the artist’s strengths, weaknesses, opportunities and threats. It may look like a cold approach, but it’s necessary to meet the expectations of the music industry. Artistic Directors are able to associate this assessment with the emotional sensitivity of the artist.

Pauline Raignault had advised Allebou to keep his identity and do what he knows how to do best, the ‘kickage’. He followed her advice by releasing a song in this direction and did not regret it; today, it’s the song that has the most streams on his Spotify profile. She recommended him to work on his skills of melody, topline, chorus, writing with emotional depth, to be able to diversify his skills and his artistic vision in the future.

| Check out: Songwriting: How to make an impression as a musician

Nowadays, where the music industry is in constant change, it’s important to stay current; it requires an adapted rhythm of content and releases. It is necessary to stand out from the crowd, while keeping a framework for each performance to tease people and keep an overall consistency.

The artist must be able to find a harmony between the content and their background. You have to work every freestyle posted on the networks from A to Z so that they are all aligned. Pauline also advises to integrate the public in her decisions to retain them and not neglect anyone. She recommends avoiding musical projects that go in all directions. You have to test yourself at the beginning to know what you do best and then you have to go in that direction without scattering all over the place.

7. If you are an independent artist, who can fulfill the role of an AD?

According to Pauline, the best solution would be to put together a panel of people around you and collect their opinions. Ideally, the people on the panel do not have the same influences but listen to the same kind of music as your project. Ask them to be critical in justifying and arguing. This is what will allow you to correct certain aspects. Avoid asking only “fan friends” who will only tell you “It’s awesome!”

Send your song to Groover to receive constructive feedback about your music in less than 7 days.

For Allebou, what is perhaps the most complicated is whether he should release a single or not. He says that he decided to release a single that had not necessarily convinced him or his entourage – apart from one person. He realized that it didn’t sound like him after the release.

Today, urban projects are linked to the web while many others are developed without airplay or television. That is a factor to consider. For example, for the single ‘On verra’, Nekfeu was not necessarily going to release it but he followed the advice of his artistic direction team which was thought strategically in relation to the music market. The single received massive radio play which propelled it to the forefront.

| Check out: How to get signed by label when you are an independent artist?

8. The evolution of an artist’s career

Nowadays, the pressure of time that artists feel has become a critical part of the profession. Still, it’s not necessarily a good idea to hurry up and release tracks every month. You have to align everything: the concept, the substance, the form and even the promotional and marketing plans to convince the public and attract the right listeners.

The best strategy would be to get out of the mindset to just reach and get on the networks and develop your fanbase while working in parallel on the real substantive project. For example, you can take an afternoon in the studio where you only do freestyles in IGTV format and then you will have more time to work substantively on other sessions.

Nowadays, independent artists manage many aspects of their career themselves. Groover is a great ally to help you develop your surroundings and increase your visibility while receiving objective and benevolent feedback on your music.

| Check out: How to use Groover to promote your music with success?

Dan Howls gets an international audience, thanks to Groover

5 Mixing Tips and Tricks: How to Make...

5 Tips on How to Make Newsletters to...

How to Legally Release a Cover Song on...

How to promote your music and boost your...

Landing a Job as Crew in the Musical...