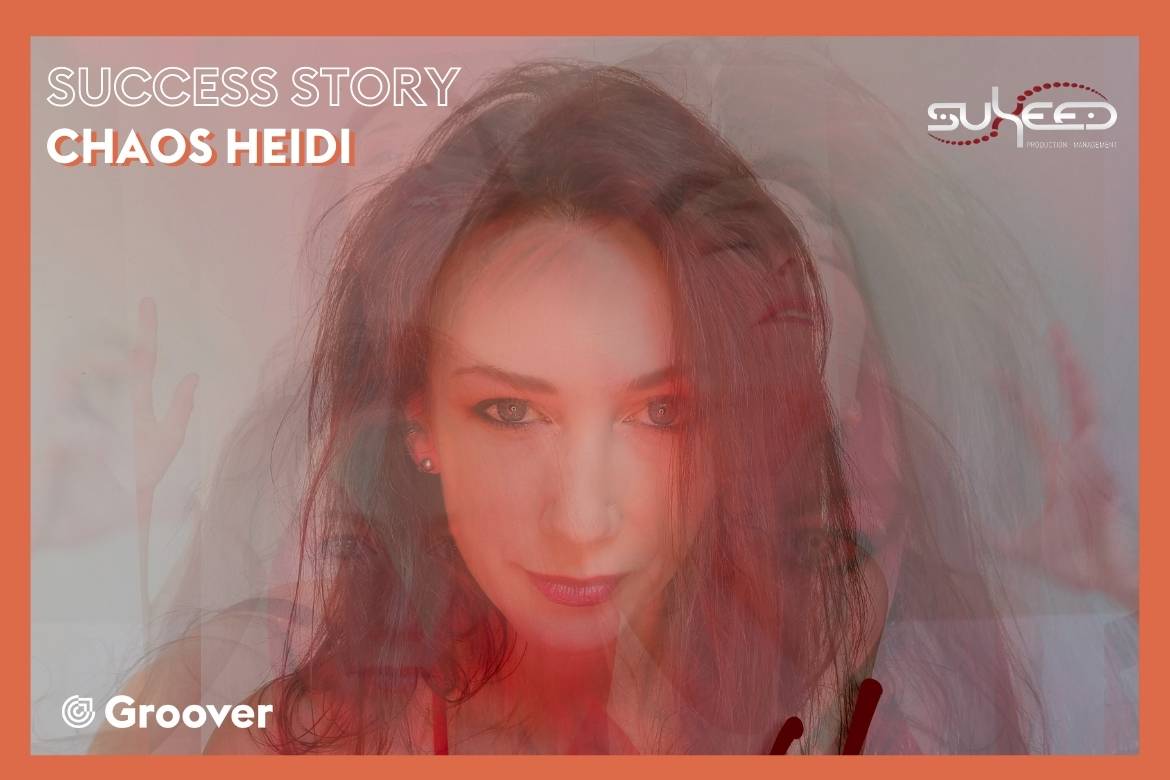 The artist Chaos Heidi found her label Suxeed after sending them her music on Groover. We went to meet them to learn more about their respective stories and upcoming projects!

I’ve used Groover twice. The first time I got a lot of encouraging feedback, but the same weak points were pointed out by almost everyone, I worked on it and when I came back a few months later, I found my label.

Chaos Heidi, can you introduce your musical project to us?

It is a solo project, rather polymorphic and contrasted because it mixes sounds borrowed from several universes, electro-rock for a lot, but also pop, trip hop… The voice is my main instrument and I like to play with the registers and the intentions to serve my texts, for a lot in French, with some touches of English sometimes. To give you an idea, you can mix Billie Eilish, Mylène Farmer and Massive Attack!

What are your inspirations and dreams for your music?

I find my inspiration in feelings, in the introspective quite a lot… I translate emotional states, sometimes in a dark way, sometimes on the contrary with derision, distance. I have a song called “Migraine” but I treated it in a festive way and D it’s very dancy!
My dreams for my music is to be able to make it live, to share it with the people who will be touched, then to continue, to go always further. I like to say that music is an energy of exchange, it is shared; it starts from me, it will pass by other people, it will come back to me, it is nourished and enriched as it grows and we go around again!

Suxeed is a company that supports and/or accompanies artists, but also a label and publishing house.

How do you support the artists?

The accompaniment and/or support is done on a case by case basis, according to the needs of the artists, where they are and how they evolve, according to their style too. It is really very personalized. The first step is to have a good understanding with the artist, a real mutual trust, which is necessary for any teamwork. We don’t sell services, we only sign projects that we believe in and that we want to invest time and resources in.

Suxeed, you discovered Chaos Heidi on Groover. What convinced you to sign her musical project?

The originality of the songs. And because the power that it emites so well! 🙂

And in general, what do you look for in your artists?

First of all, I’m looking for originality, something different. Then, you have to feel a real motivation and solidity in the artists. Being an artist is a dream job, yes, but it requires A LOT of work and investment.

Chaos Heidi and Suxeed, what are your projects for the coming year?

After the release of a first single in November 2021, we have several other tracks ready so we are preparing a first EP for 2022 and at the same time I am also preparing and rehearsing to play these tracks on stage and make the project live.

As an artist, I advise to have people listen to things relatively quickly, to take advice from professionals because sometimes it’s hard to have the necessary distance alone. I’ve used Groover twice. The first time I had a lot of encouraging feedback, but the same weak points were pointed out by almost everyone, I worked in this direction and when I came back a few months later, I found my label.

It’s a great platform to connect artists and professionals. I was able to contact very easily the right people to whom to listen to my project, the feedbacks were numerous and often very useful and argued, which is precious when you prepare a new project.

| Also read: Djakarta take their career to the next level thanks to Groover

You want to gain visibility? Find a professional audience for your music?
Upload your tracks to Groover