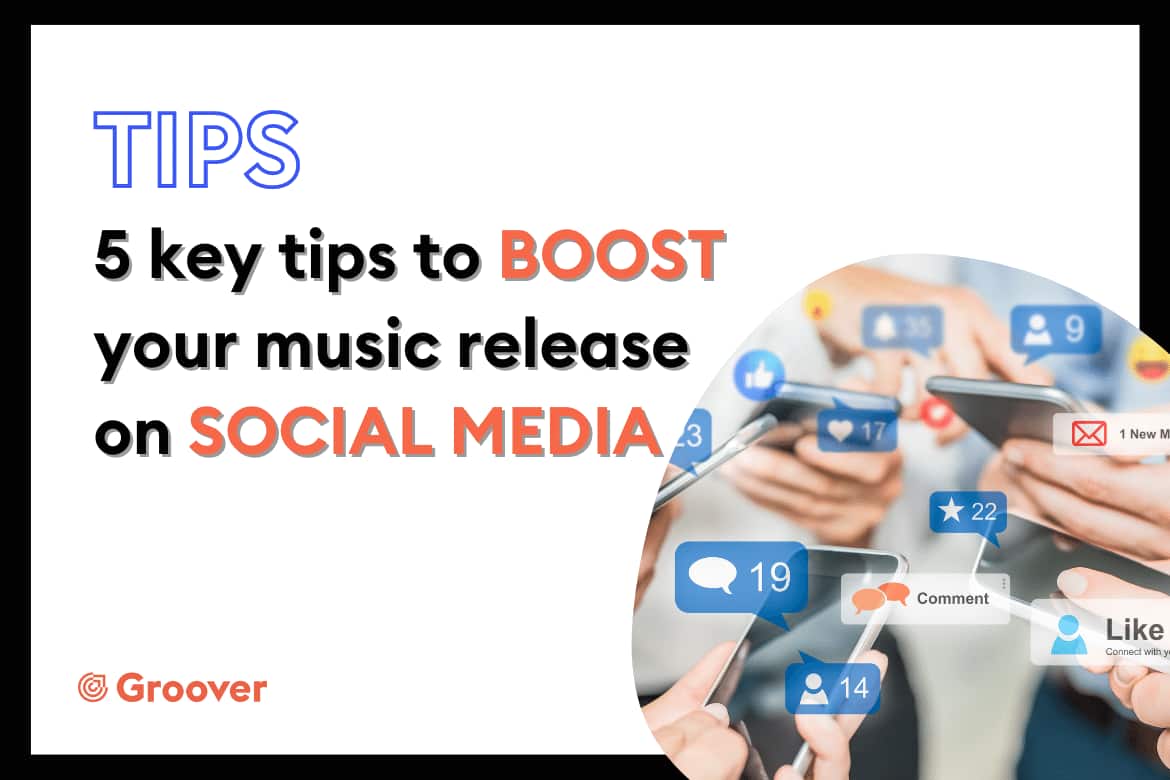 Releasing a musical project is something you work on relentlessly for months or even years. In the final stretch, you can get caught up in a spiral of non-artistic work, the communication strategy. In these moments, we need solid supports and Groover is one of them, communicating via social media is another one.

By the way, what are the most useful social networks for your digital communication in your opinion? This is a question we will try to answer.

Here’s an article that should give you some good and innovative ideas for your music promotion. Using some inspiring examples, take these ideas and adapt it to your artistic identity. These should help you gain visibility when you use social media because simply posting, is not enough. You need to have a marketing strategy, an editorial line, in short, to be sharp to increase your notoriety.

Surprisingly, we’re not starting with the most obvious of social media platforms. That’s precisely why it’s interesting, it’s very differentiating. First of all, what is Discord? For those who are not familiar with the platform, Discord is a text and audio chat service. Basically it’s a chat, in which you can also exchange by talking.

The point of being on the platform is to be able to talk directly to your fans. You will get closer to them in a considerable way. The fact of being live will favor the authenticity of the exchanges. The benefit is twofold. On the one hand, your listeners will get unfiltered answers to their questions and on the other, you will get sincere feedback on your music.

If your goal when setting up a communication strategy is to create affect, Discord is the way to go. One artist who has understood this is Kikesa. Recently, he released a project called “Rubi”. To boost its release, he decided to take care of his presence on socials by creating a private room on Discord. This allowed pre-order access to the album. People who had access to it were able to talk directly with the artist and exchange between Kikesa fans. It’s a great way to create a close-knit and engaged community.

Tip #2: INTEGRATE A LIVE TIKTOK INTO YOUR COMMUNICATION STRATEGY

If you are currently learning about artistic communication strategy, you must have seen TikTok over and over again. We will spare you the verse about the importance of your presence on this essential media, you already know it. We also need to point out the live feature on TikTok. Because we hear a little less about it, and yet it is important.

When you decide to be active on social media, hashtags are not enough; you have to use all its features. On TikTok even more than other social networks, the algorithm is king. To flatter it and drive to your content, show that you are able to use all the tools that the platform offers. Doing lives is one of them.

Obviously, it’s not just about pleasing TikTok, about being a good student, no. Like with Discord, you will stand out from others if you present yourself to the public on TikTok.
Warning: before you poor your heart and soul into the project, ask yourself if your identity compatible with the targets you could reach on TikTok? We’re talking about a relatively young community, even if it’s been changing lately. This is one of the basic principles in communication: understand who you are talking to use the right communication channel. Don’t make a mistake in your targeting, you therefore won’t waste time.

The recent representative example is that of Rosalía. Her action is exemplary because it is done live on TikTok for TikTok. It’s not a live stream intended for other uses, which would have been redirected to the platform by default. It is a performance filmed vertically, to be viewed on your phone to understand all the interest. Thinking of content for social media first is a very good practice in terms of communication strategy.

| Also read: 4 content ideas to promote my music on TikTok

Another good way to reduce the distance with your audience, to break the wall that can separate you from them. Twitch is the live streaming platform that seduces more and more content creators, influencers, and also musicians. Why such a craze? It’s true that you can do live streams on almost every social network now. But one of the great strengths of the platform is its chat. And the way the millions of active users who have taken it over use it.

When you include Twitch in your communication strategy, you have to take chat into account. You will be able to involve your viewers during your live broadcast. It’s the ideal platform, because you’ll create interaction with your audience and show them directly that you see and take into account their remarks by making them have an impact on the operation. The more you involve them, the more they will be engaged, it’s a virtuous circle.

Twitch music is not yet at its prime, let’s be clear. The platform has a flaw, it’s the fact that it is ultra strict on copyrights. We won’t complain about it, but it’s very difficult for an artist to give their consent to use their music. Like YouTube for example. When you see a musician on the platform, they will be there to create or perform live music. In these cases Twitch remains flexible.

One artist who has taken advantage of the platform is Guillaume Ferran. He performs live shows during which he composes live music, alone or accompanied by a guest. For example, November Ultra recently went live to promote its music and play its tracks live. By the way, creating synergies is a good practice of social networks to remember.

Social Networking Tip #4: USE INSTAGRAM AS AN INTIMATE JOURNAL

We all (almost) use Instagram, that’s a fact. So it’s convenient to reach a maximum of people, but it’s double-edged because it’s not easy to stand out. What you need to understand to succeed in attracting the attention of your followers is that it’s not enough to find the right hashtags. It’s essential to talk about yourself. Show your face as much as possible, and tell your life story. The more a potential fan knows about you, the more likely they get attached to you.

November Ultra understood it well. We love the tone that the musician uses to promote her music on social media, and especially her Instagram account. She does not hesitate to detail her feelings in the captions of her publications. She does not hide her slackness, nor her joys. It’s far from a sanitized and calculated communication; she takes advantage of Instagram to show who she is and not who she would like to be. It may seem cynical to talk about including sincerity in communication strategy, but it is nevertheless essential. You’ll get less of a headache, you make it easier on yourself by being yourself.

No better example to talk about Premiere than the one of BTS and their track “Butter”. The concept? Build hype around the release of a single. The idea is to give an appointment to your audience. Such day at such time, your last title will be put online. On the side, a chat is integrated, you can react and discover at the same time the reactions of the other viewers who discover the track live, just like you.

For the person who discovers the track, there is a strong feeling of belonging to a community: we were there, together, discovering for the very first time a track at the very beginning of its life. This feeling will help to trigger shares on social media, with the aim of consolidating their fan status.

In addition, having a specific date and time to provide to your fans allows you to rely on a tangible temporality, on which you can communicate.

With these tips, we hope you’ll get as many ideas as possible to get your music out there. Remember: keep it real, nothing should be forced when you are present on social media. All the ideas that are delivered here are not there to be reproduced identically, but in your way, with your means. Your image on social networks is important, take care of it !

Need feedback on your music? Get in touch with music industry professionals on Groover now!

How to use Groover for music promotion? Our live Q&A recap

Where To Perform In NYC as an Independent...