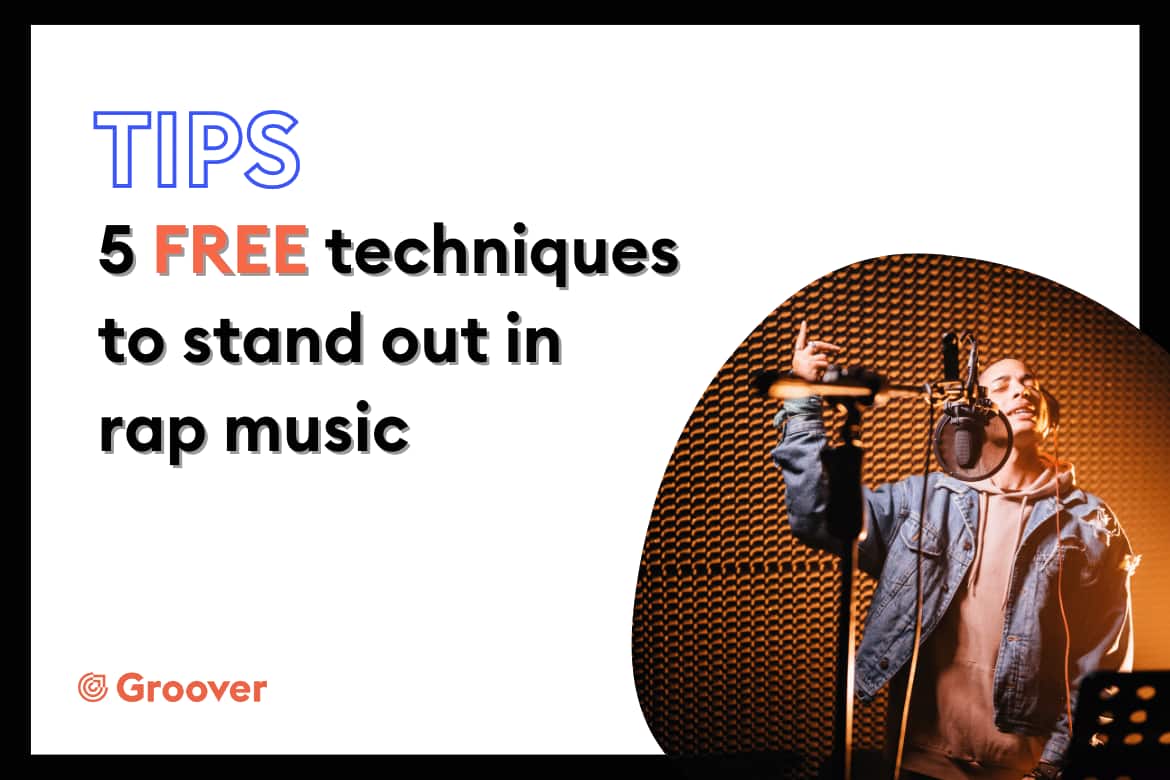 This is more true than ever in 2022: rap is one of the top charting genres worldwide. No need to be a genius to understand 2 things. First, the market is open: there are numerous rap consumer. Second, the market is competitive: there are many artists willing to sell it. And in these cases, artists have a vested interest in leveraging incremental benefits. And really, it’s as simple as that… you just have to know it!

I’m Theodore, editor-in-chief of NewTone media, and I’ve decided to share with you 5 free techniques to stand out in rap music!

Where do these techniques come from?

The rap-world is vast and NewTone is the media that detects the rising stars. Listening to emerging talent, gauging quality, betting on the best of the best: these are the practices that we decided to lead with. By receiving tracks and projects, in our inbox and on Groover (a music promotion platform that puts independent artists in contact with the best media, radios, labels and music industry professionals, with a guaranteed response within 7 days), and we’ve noticed that there are a few requirements in order to get our attachment. Sometimes, it can be incredibly frustrating to not get the results you want after hours spent recording and creating your music just because of poor communication. So, make sure to gather all the necessary tools for your toolbox and put the best odds in your favor.

Want to make it big? – Apply these 5 techniques to stand out in rap music that won’t cost you a dime.

Sometimes, we get tracks that don’t reach the quality required to be immediately relayed on media. I’m not talking about the structure or vocal control, but the mix or maybe the mastering. So before you think about how to stand out in the rap world, spend the time and money promoting and bettering your sound; make sure it’s good!

Of course, quality is subjective. But you can easily gauge it by testing a track on your friends and family, or with music professionals directly on Groover and guarantee objectivity in your feedback. Though it may seem silly to offer this as a piece of advice as many of you follow this by instinct. However,  it is important to not neglect the following because not only is it free, but it will save you money and make you progress!

| Also see: Why and how to get constructive feedback on your music?

Chance is on your side because nowadays, hip hop speaks to everyone. So choose a diverse panel: not just close friends or family; not just men or women. Ideally, make a small list of about ten people, of various ages, genders and levels of proximity. Don’t hesitate to include friends of friends and complete strangers on this list, they may be the most honest, because they are less concerned about offending you!

Then, don’t take their compliments at face value! Analyze them. Observe their reaction, ask them questions. Ask them which artist you make them think of.

Note the kind of advice they give you. Do they tend to tell you “it’s good but you could improve this, or that”? If so, that’s a sign that your music can still be worked on. Do they ask you for a link so they can listen to the song again on their own, do they talk to you about it several days after listening or do they sing the topline? That’s a good sign: you’re ready for a good promo!

Finally, and this is very concrete: try to be sensible with the tracks that you pitch. We often receive tracks in freestyle format: for example tracks with little or no mix, without chorus, or on known beats and prods. These tracks are good to practice or even to generate a good word of mouth, but don’t expect too much to get an article.

At NewTone, we sometimes receive pop-rock, jazz or electro tracks. However, it is very clear that we promote rap artists. Media outlet’s main goal is to gather a group of people around certain musical tastes to support it. An artist’s main objective, especially those who want to stand out in rap, is to find their audience. The best way for them to do thus is by being promoted by media that reach precisely their target audience and not another one.

If you send the next rap masterpiece to Radio Classique, they will miss it without question. And that’s normal, because their target is not yours! So use the tools at your disposal and looks for media that addresses your target audience directly.

Be rigorous, because even within the rap sphere, each media outlet has their own “editorial line”. That is to say that each one recruits people not only for their skills but also for their tastes. You have to understand why NewTone promotes Rad Cartier and Deadi but not Naps. We have some kind of very abstract algorithm, which you can crack by practicing stalking. Look closely at what each editor of each media outlet is used to relaying, playlisting, filming.

#3 Standing out in rap is also about :
Choosing the right words and talking about the right songs

If you have put into practice the two previous tips, this one will be much easier to handle! Especially since rap media outlets are still few and far between and the ways of talking about it are not too scattered.

Do your relatives tell you that your music reminds them of another artist? Ask yourself what words the media uses to talk about it. The media you’re targeting has a playlist called “Bangers”? Send them your banger as a priority and use the same keywords from their playlist description!

| Check out: How do I get into Spotify playlists?

With this technique, you won’t need an exceptional piece of writing to seduce journalists. It’s a matter of mimicry: if they use certain words in a column, it’s because the music they like provokes that vocabulary. You will do the opposite: use this vocabulary to make them like your music.

Few rap media, but many rappers… you can conclude that saying “I rap” in your bio is far from being enough since tens of thousands of people in France “rap”. So use the previous tips to write a bio that, in 3 sentences with the right keywords, will make you a unique artist!

| Also see: Storytelling – how to build a universe around your music?

#4 A picture is worth a thousand words

Honestly, if you just apply the first 3 techniques, you already have a high change to pique NewTone’s curiosity. As an editor, when I think the music is good and well presented, my first reflex is to analyze the image. Because if I want to relay, I’m going to need a music video and pictures. And then, sometimes, it’s a drama. I’m exaggerating for the style, but it can really become prohibitive.

Rap is a music that can be produced quite easily, from home and with limited equipment. That’s why it’s so widespread and that’s why, even if it’s counter-intuitive, the image is so important to the hip hop media.

Don’t be afraid: you won’t necessarily need professional equipment if you can’t afford it! If you can save up to invest, that’s the best thing. But I promised you free techniques and I guarantee you that a good phone can be enough. And if you don’t have one, don’t tell me you can’t borrow one for the day.

A piece of advice: adapt your ambitions to your budget. Forget about 3D and purple neon if you’re a ric-rac, put everything in your style, work on your attitude and find a nice place. With 3 iPhone shots and some editing on an app, you can get a decent result. Journalists and the public will understand that it’s the way to do it and that can make your charm.

I’ve also noticed that many young rap artists like the idea of hiding their faces. That’s commendable, but you’re not going to break the rule. Without your face, you’ll need art direction even more. Take 3D visuals from YouTube (credit the creators), royalty-free images, customize your hood with a logo, define a recurring color code… In short, create your new identity!

Now you’re really playing with the stars. And yet, it can all end right here if you don’t put the right links in the right places. This last technique is to make life easier for the journalists you contact and I promise you that we will be grateful.

If you go through Groover, the platform makes your job easier and that’s what I find great. There is a space for a private Soundcloud or private/unlisted Youtube link, if you send your track in advance (which I recommend), a space for your instagram and other networks, a space for your bio… Understand that the Groover team didn’t create them for nothing. Each space is important, so make the most of it!

A common mistake I’ve observed is forgetting to put the Instagram link… How am I going to manage to mention the artist if I decide to share the track? There, the risk of abandonment is high, and it would have taken you an extra 30 seconds. Also, prefer SoundCloud, YouTube or LinkFire links to WeTransfer, it will be much smoother!

| Also see: How to get your music known on Youtube?

There’s nothing like press relations to find your audience and stand out in rap. With well crafted emails, you can get noticed, as long as you use these 5 techniques. At NewTone, we use Groover more and more because we think it encourages artists to professionalize their approach. It’s not free, but with the money you’ve saved thanks to the 5 techniques I gave you to stand out in rap, you should be able to find your way! To reduce these costs even more, don’t hesitate to register via this link and use this code for your campaign: NEWTONEBLOG10 – valid until November 30th. See you soon!

3 tips to optimize your Groover campaign with...

3 mistakes to avoid when promoting your music...

10 tips to optimize your Bandcamp and make...

Sampling Successfully: All the Tricks to Creating without...