How to use Groover for music promotion? Our live Q&A recap 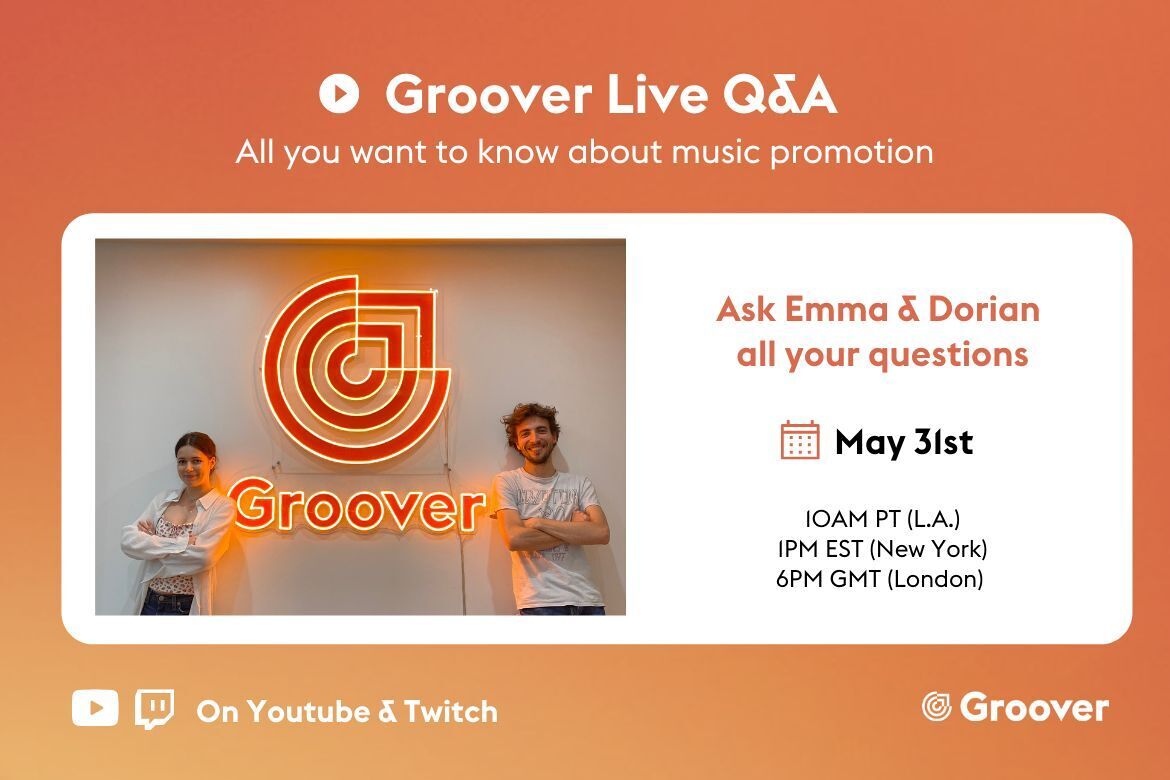 Our first Groover live Q&A session was hosted last week by Dorian (co-founder) and Emma (artist success manager) and we received so many interesting questions about the platform and music promotion in general. We thought we might as well help other independent musicians with a short recap!

1. What is the goal of Groover and how does it help artists?
2. How to determine if a song is marketable and worth spending money on promotion for?
3. When should you start promoting a track? Is it useful to promote a track after the release?
4. As an up and coming artist, what should I spend the most money on?
5. Can I use Groover for music which is meant to be a support for movies/video games.. and who should I target?
6. How much to invest in a Groover campaign?

1. What is the goal of Groover and how does it help artists?

Groover’s goal is to help artists get their music heard and receive guaranteed feedback on their music. The curators and pros who like the track will also share it: add it to a playlist, write a review about the song, share it on social media or play it on their radio for instance. You can also reach out to labels, publishers, and managers to build your professional entourage.

Groover helps artists by providing an effective and affordable way to promote their music by contacting pros and curators among more than 1600 around the world.

2. How to determine if a song is marketable and worth spending money on promotion for?

It’s also good to ask yourself this question. If you’re not sure about the marketability of your song, it’s better to focus on this aspect before looking into music promotion. You can always reach out to mentors and sound specialists on Groover to get constructive feedback on the track. It’s a way for you to understand where you stand before you start planning your promotion strategy. Mentors can also give you advice on your music career and other related topics.

3. When should you start promoting a track? Is it useful to promote a track after the release?

A release can be promoted at any time on Groover. You can start to contact labels, managers but also media and radio outlets before the release date.

Concerning playlists, we advise you to wait until the release date so you can add your Spotify link to your campaign on Groover, it will make it easier for curators to share the song.

It’s also very interesting to promote your track after the release to continue to build momentum and increase its visibility. By the way, you can also promote older tracks as most curators don’t care about the release date. Pros who only want to receive unreleased tracks will indicate it on their profile to prevent misleading you. It’s a good way to continue boosting streams and can bring you fans who will listen to your future releases.

4. As an up and coming artist, what should I spend the most money on?

Of course, it’s important to spend your money on instruments, recording material, etc. to be able to make high-quality music. It’s probably going to be your biggest spending area. Then when you have put lots of effort into creating music, you want people to hear it and that’s when promotion is important. We advise you to use a platform like Groover to send your song to playlist curators, radio outlets, blogs, … and get coverage. You can also allocate a part of your promotion budget to ads on social media to help you grow your fanbase but they can be quite tricky to master.

5. Can I use Groover for music which is meant to be a support for movies/video games.. and who should I target?

You can absolutely use Groover if you make music for films or as a support for other media. There are lots of cool playlist curators who like film music and ambient music who could definitely be interested in placing your track.

You can also reach out to publishers and sync pros on Groover who are responsible for finding music for audiovisual content. If you’re the right fit for one of their clients, they could get your music in an advertisement or movie!

6. How much to invest in a Groover campaign?

It really depends on your budget! With Groover, it’s up to you to choose how many contacts you want to add to your campaign. We recommend investing at least €50 (about 25 contacts) to get interesting results. The strength of Groover lies in the fact that it can bring you many opportunities in one campaign.

We did a study on artists who had the best results on the platform and it’s confirmed that the more contacts you select on Groover, the better results you get!

Do you have questions to ask us? We’ll be doing these live Q&As regularly so follow us on social media and you won’t miss it (we also post lots of cool content about our events, music promotion advice for artists, …)

You can also watch the full replay here ⬇️

Use our code YOUARETHEBEST at your campaign recap for 10% off ⬇️

How to find a manager when you are an independent artist?