Why is the EP the best asset for emerging artists? 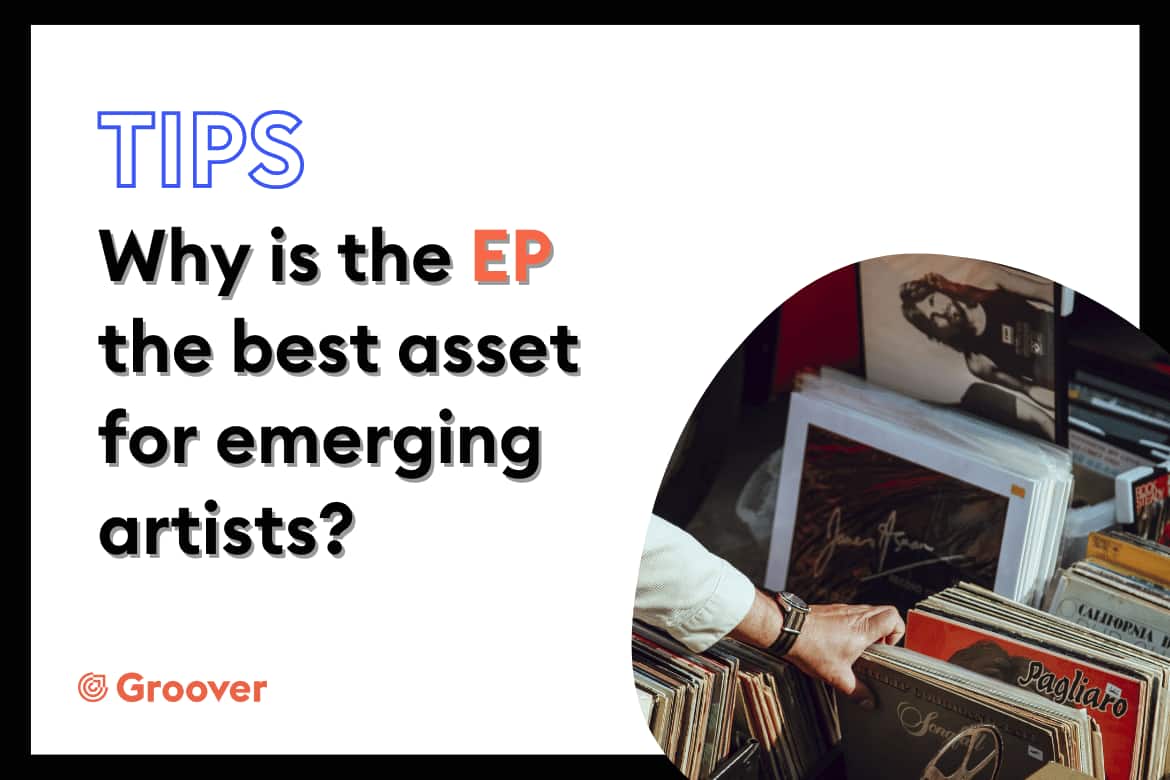 The EP is the business card of an artist. To promote your music, you need to have material to present to the public, to potential labels, to future fans. With this format, the musician who starts out has the opportunity to show the extent of their talent, without taking too many financial risks as it is the case with an album.

The EP is the perfect compromise to optimize one’s budget, while developing one’s art, by making oneself known to the public and to music curators. First you release a few tracks, then one or more EPs, and finally an album.

What is the difference between an EP and an album?

The single, the EP, the mixtape, the album, there are a lot of formats to present your music! So let’s do a little history to understand. Because yes, the EP format is not a modern format, it dates from 1952. The context of the time, it’s only releases on vinyl. The larger the vinyl, the more tracks you could put on it. And the more tracks you can put on, the more expensive it is to produce.

To compensate for the production cost, the company RCA Victor, today a subsidiary of Sony, put on the market the EP, allowing to put more titles than on a single (45 rpm of 17,5cm) on an object of the same size. The advantage is obvious, you could release more titles for a production cost close to that of a single.

It’s practical and economical. So the format works well. Billboard magazine even includes the EP in its famous chart. And then the music industry evolves. The format became less relevant during the 70’s, and we find in the record shops only a few EPs, only singles or albums.

But at the beginning of 2000, the craze around the EP starts again thanks to the impulse of two musical trends: electro and rap. The EP format was rediscovered, allowing artists to experiment. These two styles, still relatively young, are precisely in a phase where experimentation has a great place, it falls rather well. 20 years later, neither one nor the other has abandoned the EP, but has integrated it into its very identity.

Why release an EP?

The main concern of a musician, apart from creating music, is to make their music known. From music promotion on social networks to press relations like with Groover for example, there are a multitude of ways to get your music known. To feed these processes, having an EP ready is really the ideal. Explanation.

Groover allows you to contact the best media and music industry professionals, with a guaranteed response time of less than 7 days.

To get your music heard by professionals in the music industry, having a single is not enough, nor are simple demos. You have to be able to give a glimpse of your abilities and your universe. Composing a whole album is too ambitious and too long. Whether it’s the media or the music pros, they won’t have the time to listen to the whole thing anyway and may miss what you’re trying to say.

The EP on the other hand is the ideal format. It’s a form of promise on what you’re going to be able to become. You have the time in a few tracks to show the different grounds on which you are at ease. We explained it in the intro, but the term that best describes it is the business card.

On your side, it is normal at the beginning of your career to not be yet at the level you are trying to reach. It’s almost impossible to find your sound without experimenting. Composing a project like the EP allows you to lay the foundations of your musical style, of your universe, to be able to develop them later, in a longer musical project.

| Also read: Building a universe around your project

Let’s take the example of Laylow. Today, the artist is credited with having developed a successful universe that carries his listeners along with him. But before reaching this point, with the albums Trinity and the Strange story of Mr. Anderson, he released 5 EPs. So many projects during which he was able to work on his artistic identity, to push his concepts to their limits, while developing his audience.

To gain visibility, it is very interesting because it acts as a teaser. You offer a glimpse of your artistic proposal, which will create an expectation among those who will appreciate it. When the album arrives, you will already have a fan base ready to share your music, to let others discover it.

We’ve talked a lot about early career artists, but the EP is not only useful before the first album. It’s just as important afterwards, in order to keep the interest around your artistic project, and to stay present with your audience. As the saying goes, strike while the iron is hot. Making a second album takes a lot of time, the EP is a way to capitalize on the success of your recently released album, and to continue to satisfy your fan base, without expending the same energy as for an album.

How much does it cost to release an EP?

As you can imagine, we are not going to give a price. Music creation can cost anything from almost nothing to thousands of euros. It all depends on what you decide to do, how you do it, and most of all on your budget. Let’s explore together the different possible scenarios.

When we say almost zero, it is without counting your time of course. The human cost is difficult to quantify, it is a resource that you have, you will only reap the benefits later. Regarding the material, once again, all prices exist. You can decide to invest in a home studio instead of renting slots in professional studios. At first it can be expensive but in the long run it will be advantageous, without the computer, you can count between 400€ and 2000€.

| Also read: How to choose the right recording studio for your musical project?

For the studio, there are several modes of operation. It is strongly advised to use a sound engineer, but it is obviously not mandatory. Booke the off-peak hours, you will save money. Count between 35 and 60€/hour in Paris and its surroundings.

You will have understood, the less hours you spend in the studio the more advantageous it is, one more reason to choose the EP as your first project: it is shorter by definition, thus requiring less investment.

Now that we’re there, take your calculator, do the count and you’ll have a figure. Add to that the cost of distribution, between 20 and 50€ / year depending on the digital distributor you choose, and you get the budget needed to release an EP.

Need feedback on your music? Get in touch with music industry pros on Groover now!

Top 10 Instagram tools (or features) to boost your music career

3 tips to optimize your Groover campaign with rap-centric media

How to Use Spotify Canvas to Add Looping...

How to find a manager when you are...

r/PromoteYourMusic – How to use this subreddit devoted...