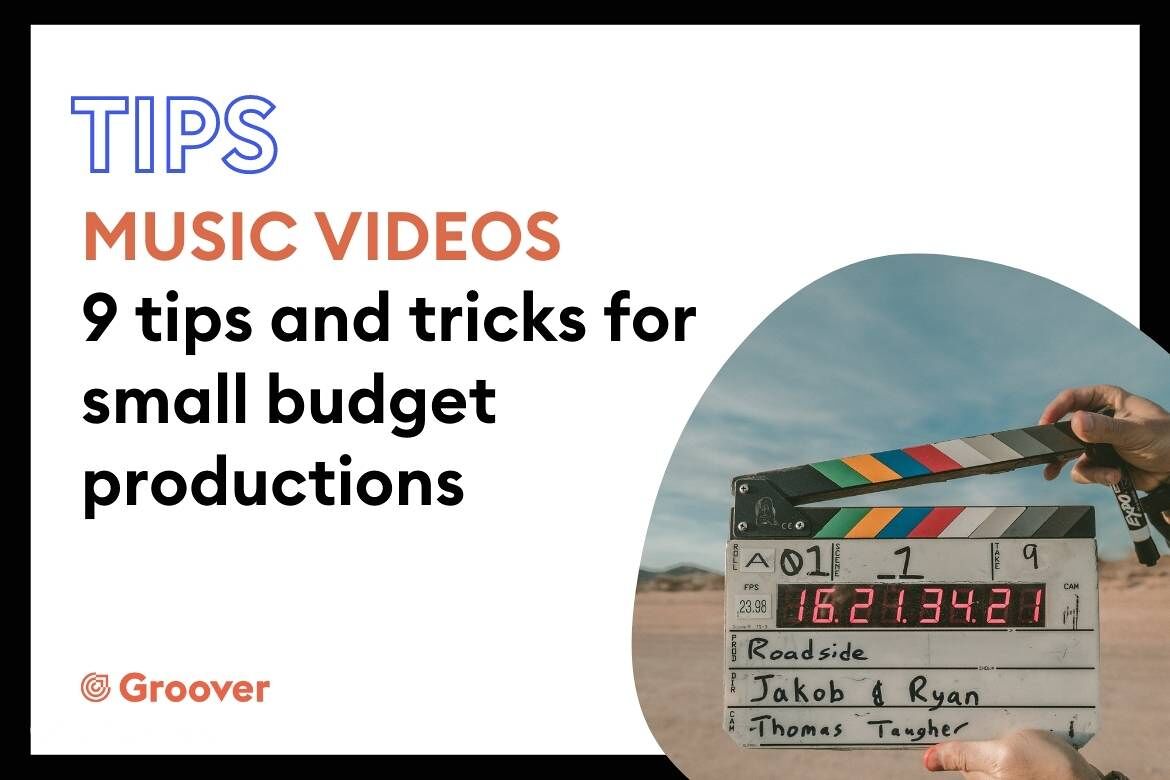 Today, in a world where 100,000 new songs are released everyday on streaming platforms where music is consumed mainly online, making a music video to give visibility to your music in the hub of social networks is an absolute necessity.

But creating a music video is always the same headache when you are an independent artist. Because if you had a big budget and lots of contacts, you’d call a big shot director and fly to Palm Springs to be driven in a convertible by a guy dressed as a reaper. But that’s not the case.

But that’s okay, Groover is here with several tips to help you make low budget music video productions to accompany your track or EP releases.

Some tips below and a GIFT at the end:

Summary:
Tip #1: FIND THE MATERIALS NEEDED TO GET STARTED
Tip #2: AFTER THE VIDEO PRODUCTION, COMES THE EDITING
Tip #3: FOR A MUSIC VIDEO, CLASSIC WORKS…
Tip #4: BE CREATIVE AND FIND “THE” THEME IDEA
Tip #5: MAKE A MONTAGE OF ARCHIVED VIDEOS
Tip #6: BE BOLD AND COLLABORATE WITH AN ARTIST YOU LOVE!
Tip #7: FINANCE THE PROJECT INTELLIGENTLY
Tip #8: PROMOTE YOUR CLIP EFFECTIVELY
Tip #9 and GIFT: get inspired by other DIY videos to build your own unique universe!

Tip #1: FIND THE MATERIALS NEEDED TO GET STARTED

For filming, get some cameras more or less expensive

Obviously, the best option would be to have a buddy in film school who has cameras or equipment available. However, that’s not most peoples reality. Here is a list of classic cameras that can be useful for the creation of your music videos and additional video material for your musical project. This can help you in the long run so it might be worth investing in.

To find cheap and refurbished cameras, I recommend eBay or other market places where they sell second hand electronics.

Tip #2: AFTER THE VIDEO PRODUCTION, COMES THE EDITING

Here are some recommended editing programs with their tutorials

Lots of great tutorials are available online to learn quickly. Here is a small example of what it looks like when you start to master the editing below

…Make a video of a rehearsal, a live show, a freestyle, or your band on tour

It doesn’t take a lot of money to take videos of your band playing, at home or in concert. It’s a good way to engage your audience because everyone likes to see who is carrying the project and how they carry it.

Example with Vulfpeck below and their track Dean Town

Pastel Coast’s Vacation is another example of a music video made with tour footage, which landed in General Pop’s clips of the week!

Within the genre of rap, the right approach is to release freestyles regularly on social networks (Instagram and Facebook). There are even challenges that can give you a framework to get started, like those organized by 1minutederap. It creates a sense of routine for those who follow what you do and it can be a very good medium to communicate and promote your music and is not that complex in terms of music video production. The most important thing is the visual environment in the background of your freestyle. Try to choose a background that is really representative of your music and that speaks to you visually. It can be with your friends or in a colorful room with posters, no need to overdo it!

With this simple freestyle technique in his videos, Alvin Chris got people talking about him on Instagram and TikTok! He ended up releasing the track Coucou c’est encore moi on the platforms and it has already accumulated more than 1 million streams.

Tip #4: BE CREATIVE AND FIND “THE” THEME IDEA

Simple and easy to film, a good idea changes everything!

We won’t advise you to drive 300km in a GT3 porch on the highway like APASH in the Validated series (even if it’s very very stylish) but to find something that works well (and is legal).

Your good theme idea can be inspired by a news phenomenon and it can also be a still shot of you making pancakes at home during lockdown. For example, Hervé’s clip Si bien du mal [Universal/Intiales] which has more than 300,000 views on YouTube. Or the very simple photo and video slide of her iPhone by Alicia with Sasuke which has 115,000 views [Universal/New].

Find stock videos in royalty free video banks and edit them easily. Try to find a theme close to the message you want to send with your music.

Tip #6: BE BOLD AND COLLABORATE WITH AN ARTIST YOU LOVE!

Working on sound is not the same as working on light and image, try to get some collaborators

If you have a contact you know who works in a film school, this is a good time to contact him.

Don’t hesitate to go for the nerve when you like an artist. A little personal story as an example. For my musical project, Sevigne (December Square label), I was struggling to find a music video idea. When I saw an exhibition of the photographer Misha de Ridder in Amsterdam that I liked, I simply sent him an email to know if he wanted to collaborate on a music video project. So he offered me to make a slideshow of never released photos to go with the video. So it might be worth it to try to send some emails from time to time.

Sometimes being bold pays off even more than what you would think! And it’s always possible to contact artists or guests of great stature. The best inspiring example on the subject is Riles who managed to bring Snoop Dogg in one of his clips. Pretty crazy! You will never know if you don’t try!

The idea is that the whole music video production is cheap or that it’s easy to find the money to make it. Several options are possible: advance the funds from your own pocket, include a promotion budget around the making of the music video if possible, ask some of your fans to participate in the financing of your clip using KissKissBankBank for example.

With Groover, you can get a 1% discount on the KissKissBankBank commission. Just send an email to kisskiss@groover.co to validate this advantage once your campaign is launched on KissKissBankBank. Discover all our partner offers here.

You can then of course share it on your social media and sponsor the post to gain visibility.

Here is a small example with the clip of My Reflection by Magon which got a lot of coverage on social networks and in the media following the use of Groover (Le Cargo, Lost Song, General Pop, Longueur d’Ondes, Rock’in’Shake etc.)

Tip #9 and GIFT: get inspired by other DIY videos to build your own unique universe!

For this, we have prepared a gift for you with the Groover team and here we have created a table that lists all the best low-budget music videos that we have seen along the way on the Groover platform, or via recommendations.

You will be able to search the database of music videos by filtering according to your desires based on keywords, your budget, the material used etc.

The idea is that it can help other artists: if you have made a video yourself and you want us to add it to the list to help other artists, then send me the link to your music video – to romain@groover.co – and in exchange we’ll give you a 10% discount for your first campaign on Groover!

> Storytelling: Building a Universe Around Your Musical Project

Gain visibility, Groover is the way to do that!

Audio mastering, what is it for and where to get your tracks mastered?

How to choose the right recording studio for your musical project?

Why use Shazam as an artist?

Artistic Director: What is the role of an...