Why use Shazam as an artist? 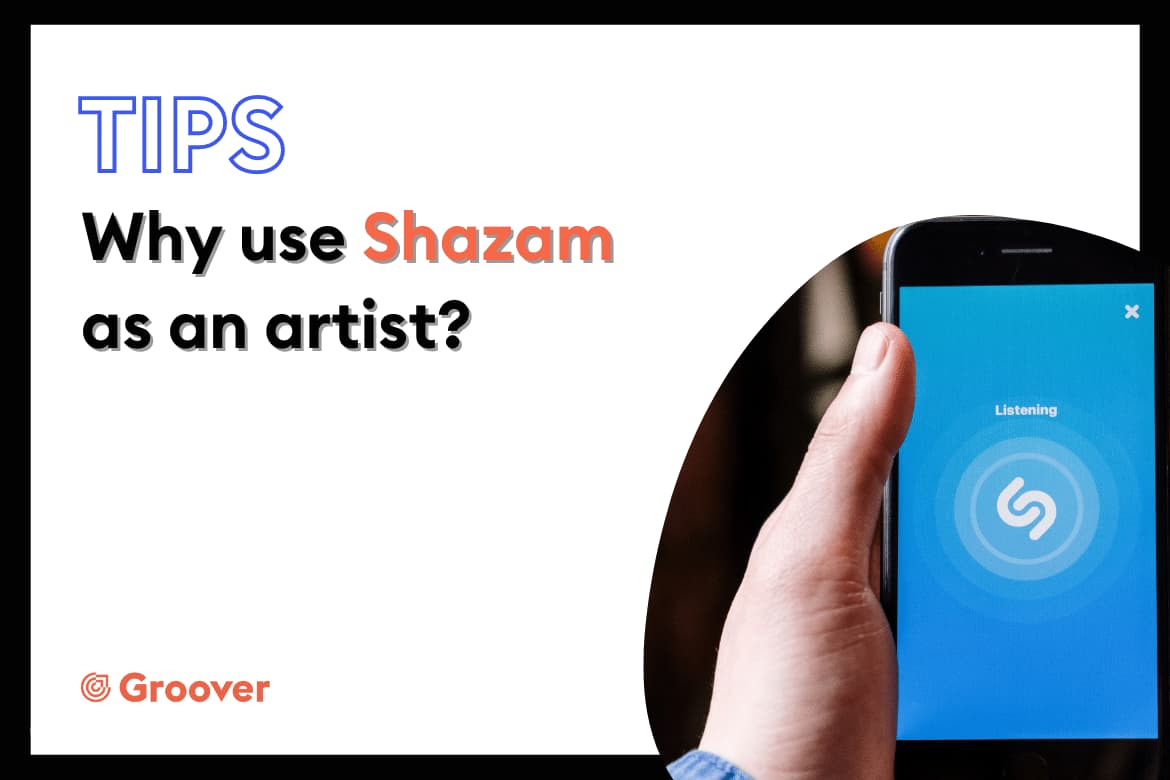 Who has never used Shazam? A sound plays in a film, on the radio, in an advertisement, we take our phone out, press the only button on the  app and in just a few seconds, we discover the artist and a song we now love. This tool is essential for discovering emerging artists!

The other benefit of Shazam — this time speaking directly to you, artists — is access to your stats through Apple Music for Artists. This data is valuable because it can help you target your potential fans more accurately. So it’s in your best interest to integrate Shazam and Apple Music for Artists into your music promotion strategy.
Shazam is an app that has been around since 2008, one of the first on the iPhone. And before that, the company already offered to scan audio extracts by dialing a dedicated phone number. Since 2021, Shazam Entertainment Limited has been communicating on some pretty crazy figures: 1 billion Shazam titles per month, more than 200 million active users. Like Groover, the medium is to be taken seriously when distributing its music via streaming and seeking to promote it. So let’s see how to use it to gain notoriety when you’re a musician.

How to use Shazam?

Many of us have the reflex of shazaming a song. Moreover, the simple fact that the name of the app has become a verb attests to the importance it has taken in our daily lives. You are familiar with the interface of the application: just open it, hold your smartphone towards a well-audible audio source, and press the central button. The result is displayed in a few seconds.

Since 2017, it is possible to use the application offline. You listen to a song when you don’t have a network anf use Shazam as you would have. The app will save the song and find its name for you when you are no longer offline.

How does Shazam work?

By what witchcraft can a simple free application recognize a title in a few thousandths of a second thanks to a short audio extract? Shazam transforms what it hears into a code thanks to the audio spectrum of the song, which it then compares to its gigantic database, in which millions of codes are classified, and boom: it takes you out the music you are looking for.

When you think about it, what this app does in seconds is impressive. It isolates the most intense moments of the excerpt from the piece, transforms that into an audio imprint, then transposes it into code. It can then check if there is a code in its database that matches. If so, you have your answer. This also explains why it does not recognize a song being played live: it would have to be played to the millisecond in the same way as the studio version. Which is impossible, unless it’s a playback.

Audio recognition as a communication tool

Now that we have taken note of how Shazam works, you are probably going to ask us how and why you should integrate it into your communication strategy? And you’re right, it’s not necessarily obvious. Yet the benefits can be really significant. One of the most interesting advantages is the possibility of connecting your Apple Music or Spotify account to Shazam. We explain.

When a user shazams one of your songs, it usually doesn’t stop there. First, your song is now listed in its personal history on the mobile application. Your future fan will be able to come back to it later, if they are not already manually adding your song to a playlist corresponding to their musical tastes.
On the streaming side, the fact of shazaming can have a direct and indirect impact. Two possibilities, the first: the user has a simple account on the app and manually adds your song to one of their playlists on a streaming platform. It creates engagement on your tracks, end-to-end interactions will raise a few flags and potentially alert playlist curators that something is going on with your music.

Are you looking to appear on the radio, enter a playlist, obtain press coverage? ⬇️

The second and more interesting possibility is that Shazam strongly encourages listeners who use their services to recognize music, to register via their Apple Music or Spotify accounts. Why? When it is shazamed, a song is automatically found in a dedicated playlist. Take into account that a few moments ago, this future fan did not know them or their music, and is now in one of their playlists.

| Also read : Find an audience for your musical project: 7 tips for musicians

Shazam has integrated with Siri and Snapchat

For iPhone users, there is no longer any need to unlock their phone, search for the application and press the button, just say: “Hey Siri, what is this? and get an almost instantaneus response. It’s happened to all of us, we’ve missed a song that was about to end because we open our phone, right? It’s incredibly frustrating. With this option offered by Apple, the chances of discovering your music are even easier.

The audio recognition application is making its way everywhere, even to Snapchat, through the scanning function. This option set up by the social network, allows for a lot of things: to recognize the breed of a dog, to offer you a suitable filter, to solve a math problem and to recognize the music playing in the background. Without any real added value, the fact that you can use Shazam in this way simply allows you to reach even more people. In January 2022, Snapchat had 22 million users, that alone should be an incentive.

The impact of Shazam on your visibility

You are aware that all music streaming platforms, without exception, are governed by algorithms. The huge catalogues of music available to these services is unimaginable. The algorithms are used to help these services out and identify a maximum of signals that will help identify future hits.

Once these signals are interpreted, the algorithms will send the titles directly to dedicated playlists such as the release radar on Spotify, or send them to the platforms’ playlist curators.

These algorithms see interactions with your music as positive trends. Streams are one thing, but that’s not all. They’re mostly going to look at engagement with your music. Let’s imagine: if 100 people listen to one of your tracks and add it all to a personal playlist, the algorithm will make the difference with a track that has been listened to 100 times but never added to a playlist. The titles have the same number of streams but the first one is more promising, it is more likely to be listened to again and to generate more streams.

As the Shazam app is very often connected to streaming apps, shazaming your music will send it directly to the Shazam playlist of the person trying to find out who you are. The stores will see it as a signal of interest, take the action into account, and favour the song over another.

How to get your music on Shazam?

As you will have understood, having your musical project registered in the Shazam database is useful and very important for your development, it will allow you to make your music known. Does the app pick up your music on its own? No. Can you do something about it? Yes. Most digital distributors offer the option of distributing your music to both streaming platforms and Shazam. You just have to check in the lists made available by the digital distributors if it is feasible or not.

So to promote your music, you just have to make the right choice for your distributor. Once your project is on Shazam, you’ll have access to your stats through Apple Music for Artists. This data can be interesting in the context of an ad campaign on social networks, for example. If you find that your music is often shazamed over a certain geographic area, you may decide to put more promo budget there to transform the essay. You can also try to schedule a concert there. In short, the uses are endless, and can be very useful for musicians looking to gain visibility.

| Check out : Our best tricks to generate more streams on Spotify without cheating

> How to promote your music on Youtube?
> Deezer for creators: gain visibility and boost your streams on Deezer
> The remuneration of artists on Deezer

Need feedback on your music? Connect with music pros on Groover now!

WANT TO GROW YOUR FANBASE, STREAMS AND SALES? CHECK OUT OUR INTERVIEW WITH FEATURE.FM

Why is the EP the best asset for...

How to Get on Spotify Playlists – Groover...

How to make your streams take off on...

How to prepare the release of a new...