Groover Review – Artists and Music Professionals Give their Opinion 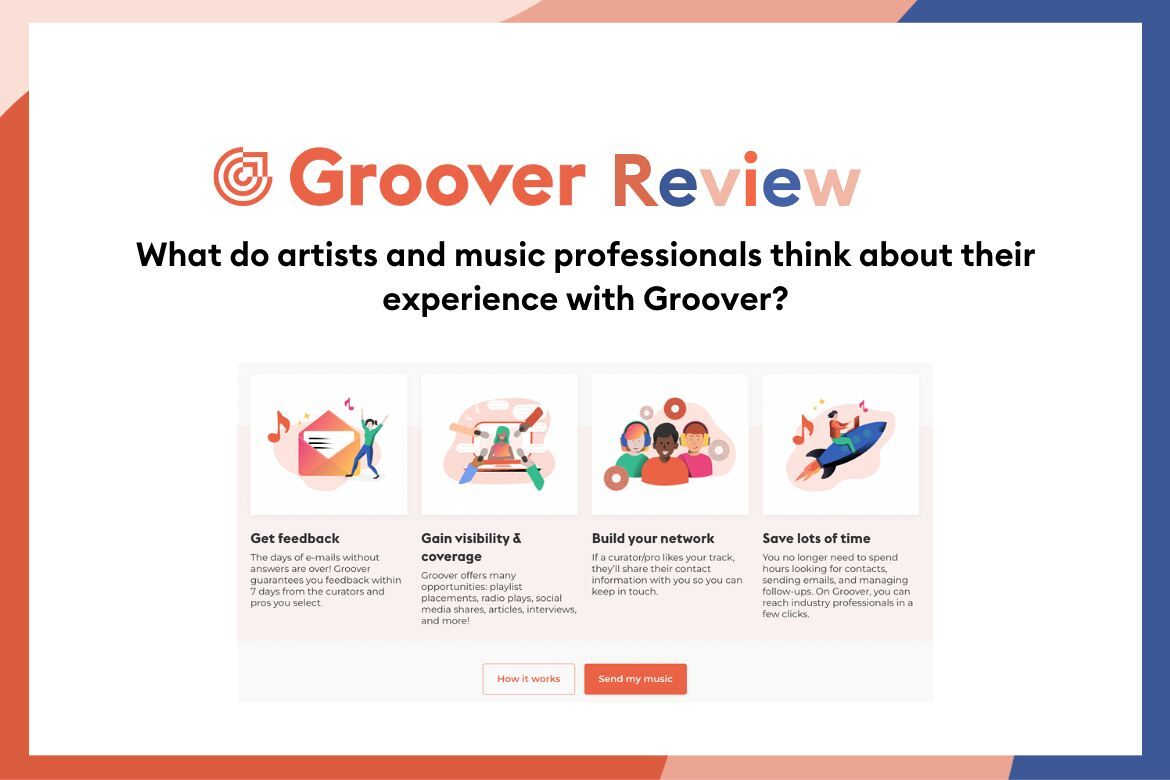 Still hesitating to use Groover? Check out every Groover review from musicians and music pros who have already tested the platform 🧐

Groover is a music promotion platform that allows emerging musicians to get in touch with music industry professionals: journalists, media outlets, record labels, playlists, radios… and the pros have 7 days to listen and respond to the artists. A way for them to discover new artists, and a way for the artists to have the insurance to be listened to and to finally have constructive feedbacks on their music, and thus more chance to see their music shared. Groover is a platform for all kinds of music: Folk, Soul, Blues, Hip-hop, Rap, Pop, Classical, Electro, Jazz…

The service and website are high quality, efficient and reliable at the highest level available

I have tried all the other playlist curation sites, and Groover is by far the best. What I’ve found is that a lot of the others will simply get you on some playlists for a month, which boosts views but goes no further. Groover actually gets you interacting with curators, including magazines, and really useful contacts. I have had my track played on three different radio stations, two lots of magazines, and loads of enquiries – just from one campaign. The other thing I’ve found, especially when compared to their main competitor (who I won’t name!), is that Groover really appreciates electronic music. I’ve found that being more European focused has resulted in far better results. I got no plays, no playlist adds, and frankly rude responses from the competition. The complete opposite from Groover, where curators are real, obviously love music, and are trying to do more than just build their own playlists. It’s a brilliant service. I wish I could give it more than 5 stars.

Using Groover has added a lot of value to my music career. The reviews and positive criticisms have improved my music style and also helped me to understand what good music should be. Even when my song was not shared by the curators, the feedbacks have been very helpful.

I used Groover more than once now, and on various tracks. Pitching songs is not expensive at $2 per pitch but most of all, the feed back I got from pitches was great. I got feedback from almost all pitches some favorable, some with interesting comments on ways to improve my art, you name it. Then, there were the playlist curators and the radios which in my case were quite positive with a number of tracks selected for radio plays. I am looking forward to pitch some more tracks in the near future.

Since the first moment I used the platform, my experience has been very enriching. In fact, I am recommending it to everyone who intends to promote their work, and who wants to receive professional and accurate feedback. I had the chance through the contest to release “Afeto no Caos” with the support of a very competent and caring team, it’s been a beautiful process. I just have to thank Groover for providing so much and for promoting together with me this work that is part of my dream/life project, and yes, I already want to repeat the dose with the next releases.

When I first learned about the platform I was shocked by the number of artists that use it as a tool to promote themselves. They are small artists, others not so much, who do what they love and dream of having their music heard. I see that the platform is very important for the artist to work on the promotion of their music. Therefore, I think it is very important to open our eyes to the work Groover has been doing

Groover Review from Milenar label – curator at Groover and receiving artists from Brazil and the world.

I met Clementine [Kendell Entertainment] in April 2020, during the release of my EP, Paradox, thanks to Groover. I sent my song “Be You”, and she accepted it! At first I was dubious, not knowing anything about it… and then I said to myself that at the end of the day, I had nothing to lose! After reading the contract in detail, I signed it!

Groover Review from Emma Doo who got her first sync opportunity on an international feature film signed by Netflix after sending her song via Groover to Kendell Entertainment.

I’ve used Groover twice. The first time I got a lot of encouraging feedback, but the same weak points were pointed out by almost everyone, I worked on it and when I came back a few months later, I found my label.

How To Come Up With an Artist Name

Open Mic London: The 10 Best Places to Be Heard

How To Add Lyrics To Spotify