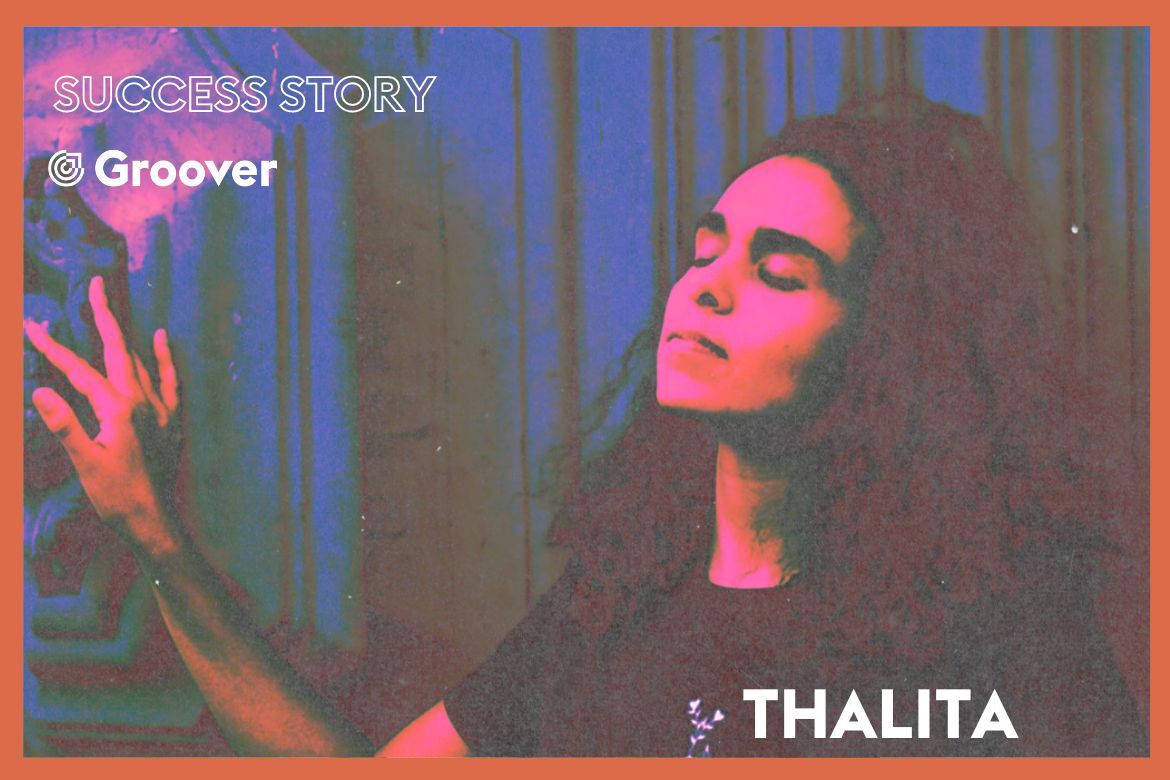 Groover organizes different contests that give the opportunity to independent artists to perform in renowned festivals, including in Brazil. In February, the artist from Pernambuco, Brazil, Thalita was selected among hundreds of artists from all over Brazil who sent their works through our platform.

The contest promoted the mixing/mastering of a single by Guigo Berger, a renowned sound engineer who has worked with artists such as Marina Sena, Linn Da Quebrada, Tuyo, among others on the Brazilian scene.

Thalita is an instrumentalist, singer, and composer. The artist carries as her trademark a Brazilian pop with a Pernambucanian way and accent. Besides having performed in several cities in Pernambuco, Thalita has been part of the line-up of major festivals such as Sonora Olinda, Red Bull Music Breaktime Sessions, and Musicalizando Direitos in Brazil.

The single chosen for the production was “Afeto no Caos” (Affection in Chaos), which talks about connections and the distance experienced by people during the Covid-19 pandemic. In addition, the artist chose to release the track right before the elections to reinforce the need to weave sincere affections in the current moment.

Thalita’s co-production with DJ Vlayck is all Lo-fi, accompanied by sound effects and mantric melodies that illustrate well the duality of chaos vs. harmony.

“Afeto no Caos” is being distributed internationally by the Groover Obsessions label and has the promotional support of Groover in Brazil.

Thalita, could you tell us a little more about your new single “Afeto no Caos”? The title caught our attention, where did this idea come from?

The idea for the title came naturally when we were thinking about the plot of the song and the context in which it was composed/produced. DJ Vlayck and I met online and started thinking and producing “Afeto no Caos” during the pandemic, in those difficult times of isolation. We were thinking of affection as a lifeboat, as something to hold on to in order to get through those difficult times, which was what filled us during this process.

Listen to the single “Afeto no Caos” 👇

Different from your past releases, the single brings Lo-fi characteristics. Do you intend to follow more of this “modern” style?

Before I got into Lo-fi I was already rethinking my sound, to add some electronic elements to make it more “modern”, so I was researching, testing, and I came across this style/musical genre.

Yes, I believe that I will still spend a long time deepening my research, experimentation, and immersion in this genre that I liked so much to get to know and produce. Working with Lo-fi up to now has only brought me good connections. I met several professionals here in Pernambuco who already knew and produced music with the same aesthetic. I am getting to know a very interesting experimental music scene here in my state, so I believe my musical work will follow this context. For now, this is what pleases me the most.

| Read also: 4 tracks sent through Groover end up in a Netflix movie!

After winning a Groover contest, you had the opportunity to work with Guigo Berger, a renowned sound engineer who is known for having worked with the new Brazilian pop star Marina Sena, and DJ Vlayck, who has been prominent in electronic music for over 10 years. Can you tell us how was it to work with them?

Working with Vlayck was a discovery for me. He is a producer from Pernambuco who had already been developing wonderful work in a style that I started to identify with at the time. All the pieces fit together! And the way he behaves during the production is beautiful, paying attention to details, and always trying to capture and build ideas together. I couldn’t have a better producer. Our connection was instantaneous and all the wonder we built together you can check out in “Afeto no Caos”.

Being able to meet and work with Guigo Berger expanded even more, not only the horizon of music but also ours (mine and DJ Vlayck’s). He brought beyond everything a conviction to us that we were on the right path. When I won the contest I couldn’t believe it. I imagined it would be a great opportunity, and it really was. I usually say that Guigo’s care in the finalization was essential to reach the final result we wanted.

His experience with renowned artists who have done such good work brought a unique and beautiful vision to the music, which I couldn’t even imagine before. We were very excited to know what he would propose, and what touch he would give. It was really amazing how this connection happened and I can only be grateful for having the opportunity to see my work being produced with so many wonderful people.

Thalita, many of our readers are artists and music professionals. We would like to know: what have been the main challenges in your career until today?

Making music and working directly with it in our country and in my state Pernambuco has its challenges. About 10 years ago, in my little town, Passira, I already knew it would not be an easy task, and it has not been simple at all. Showing the musical work with technical excellence, with the physical and financial structure that my artistic ideas demand is constant work, a task that I continue to fulfill tirelessly until today.

This happens because of the structural, social, and financial impasses (always present in an authorial and independent work, and made by a lesbian woman from Pernambuco), being outside the famous Rio-São Paulo hub, and the difficulty of finding space to present the songs. That is why I keep insisting, learning a lot, and facing the tide. Making art of resistance and use my voice is worth a lot

After “Afeto no Caos”, we want to know: what comes next?

I always prefer to leave a little bit of mystery in the air, it is part of the charm. The planning of the next releases, the mobilizations, and the structure for the future are already underway (which reassures me a lot) and leaves me full of expectations for what is about to come.

For those who follow me, I can already say that I will follow the Lo-fi aesthetic line, but with new elements and approaches. Very experienced and careful people are working on this with me, but to really know what is coming, only by following me on my social networks and digital platforms.

Thalita, how has been your experience with Groover?

Since the first moment I used the platform, my experience has been very enriching. In fact, I am recommending it to everyone who intends to promote their work, and who wants to receive professional and accurate feedback.

I had the chance through the contest to release “Afeto no Caos” with the support of a very competent and caring team, it’s been a beautiful process. I just have to thank Groover for providing so much and for promoting together with me this work that is part of my dream/life project, and yes, I already want to repeat the dose with the next releases.

– Interview by Max Leblanc and review by Thiago Cyrino –

Submit your music to curators and music professionals via Groover