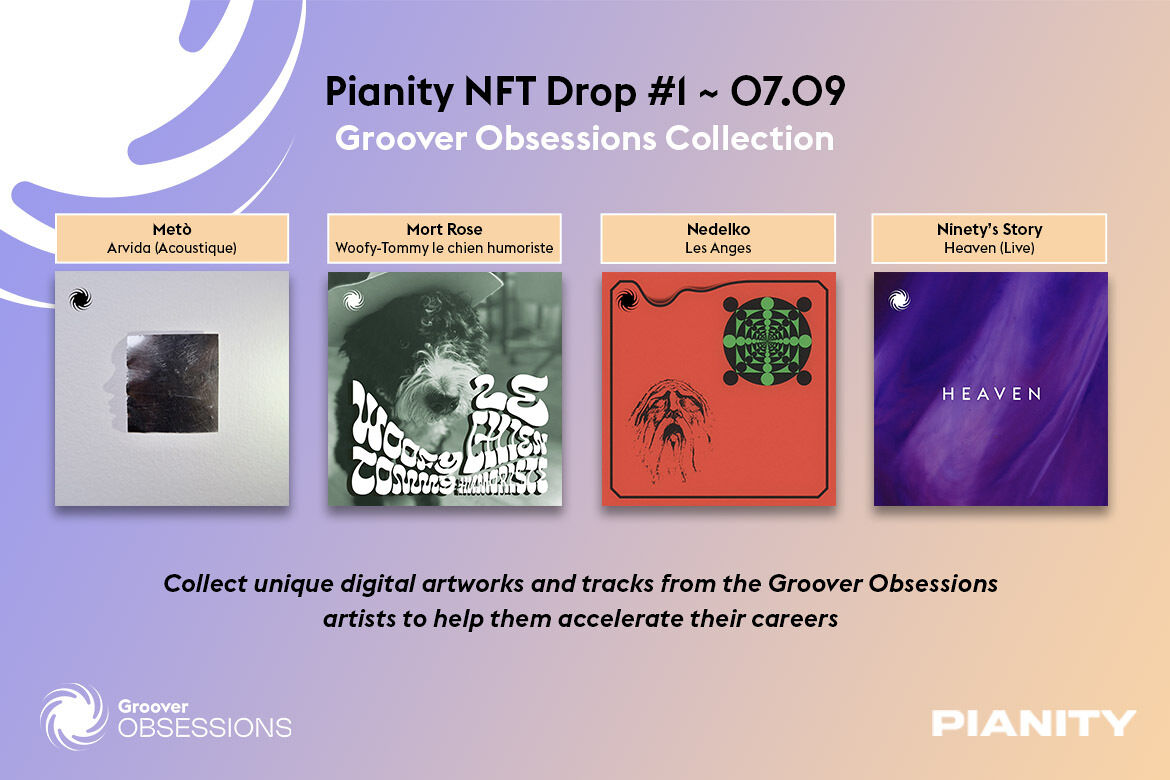 Pianity, the first French platform dedicated to music NFTs and Groover Obsessions, the artist accelerator created by Groover, get together to promote and give musician’s the opportunity to create and sell NFTs. As NFTs (non fungible tokens) take over the music industry and offer artists a new income stream, this partnership aims to use NFTs as a tool for development in the artists careers that get recognition on Groover.

What are NFTs exactly?

A NFT (Non Fongible Token) is a unique digital token, essentially a unit of data encrypted through blockchain technology. Each token is created as a unique of a work of art.

Let’s explain how NFTs apply to music. Buying a music NFT is a bit like buying a part of an exclusive version of the track and its artwork. The goal is to support the artist obviously as they set the price of the NFT and there is no intermediary. It’s also a possibility to sell NFTs after acquiring them, which is interesting when they increase in value. The more popular the artist gets, the higher the value is. It’s a very positive way to support the artists you like and show them that you believe in their project by investing in them.

The way of operating is strikingly different to streaming platforms and way more beneficial to artists.

Let’s talk numbers: 300,000 streams on Spotify (and double that amount for Youtube) only amount to 1000 euros generated. Many artists struggle to reach this amount of streams and thanks to NFTs, they can be paid directly by their community for creating value around their musical project. Users can buy NFTs through traditional methods of payment or with crypto currencies.

What is Pianity all about?

Pianity is the first French music NFT marketplace. With Pianity, artists and their communities can create, sell, buy and collect limited edition tracks and content guaranteed by the blockchain technology. What’s cool is that collectors benefit from buying these NFTs too!  Each week users receive a reward on their investment directly in their Pianity wallet, allowing collectors to use their earnings to support other artists on the platform.

Rewards are distributed each Tuesday. Pianity calculates weekly rewards according to:

Your wallet’s value isn’t taken into account, only the value of your NFTs. Rewards are sent as long as you have NFTs in your wallet. If you keep them forever, you’ll receive rewards forever.

On Pianity, when a NFT is sold, the artist gets to keep the property and rights on his art as fans and collectors buy a copy of the music. The value increases depending on the number of NFTs created, their scarcity, any associated content, the artist’s community, …  Artists automatically receive 80% of the transaction price and then 8% each time the NFT is sold.

In the long run, NFTs could be associated to additional content like concert or festival tickets, exclusive content, with an automatic redistribution of benefits to right owners.

Example of an artist page on Pianity

💡 Pianity’s first version was launched in April 2021 and allowed them to test the platform through different intelligent contract types with French and international artists. Pianity raised 1 million USD in one week thanks to the promising beta version of the platform.

Include NFTs to improve artists compensation and create exclusive formats

In less than 3 years, Groover as a major promotion service and building relationships between artists and pros via an innovating system which guarantees users to be listened to. The 50,000 active artists have already received more than 700,000 pieces of feedback on their tracks from the 1200 curators and pros on the platform. These contacts have led to more than 150,000 coverage opportunities (write ups, airplay, playlist additions…) and more than 300 signed deals with labels, publishers or managers for artists on Groover.

Send your music to pros and curators on Groover

Groover’s international development is soaring with more than 50% of the activity being outside of France, especially in the US, Canada, UK, Brazil and Italy…. The start-up also helps artists getting further in their careers and their musical projects. In 2021, Groover launched Groover Obsessions, the first artist accelerator made for the best artists discovered on the platform. More than 20 musicians already benefit from a personalized and operational support in creating new opportunities to grow their careers.

| Read also: How to use Groover to promote your music with success?

To get off to a great start, four exclusive NFT tracks from artists supported by Groover will be published, including one as a unique edition that will be put up for auction for 48h on Pianity. Each of the NFTs will include additional exclusive content:

Each of these exclusive NFTs will be sold on Pianity in a an edition limited to 10 copies and at the fixed price of 30 euros.

Send your music on Groover and contact the best labels, pros and curators of the industry with guaranteed listen and feedback in 7 days

What is an Artist Entrepreneur? Is it different to being self-employed?

Looking for gigs and revenue opportunities? Interview with...

5 Keys to Success on Patreon: Tips for...