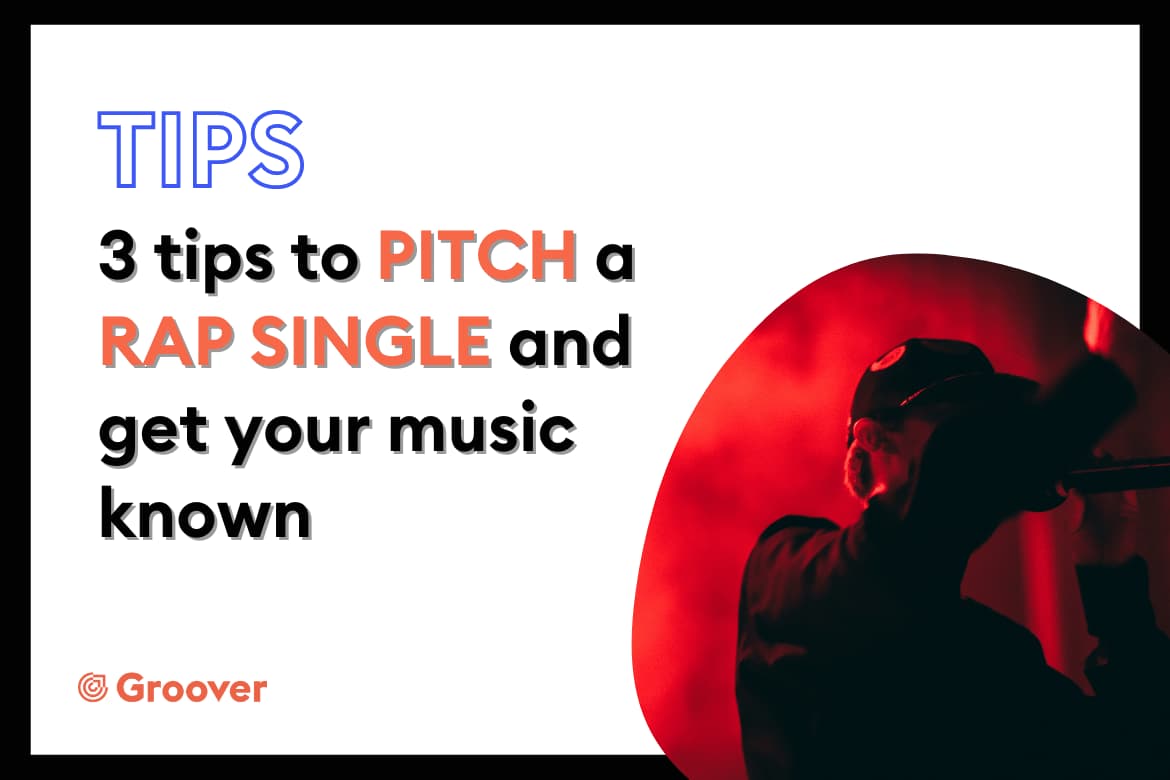 Getting your rap single in a Fresh Rap playlist, getting a relay on a hip hop media, getting a label appointment… So many seemingly closed doors to make your music known in a genre as competitive as rap! You can try to break them with buzz or unlock them with one and the same key: the pitch.

And I’m not exaggerating: as editor of the NewTone media, I know how much this short presentation of a single is determining in my choices. I’m also used to writing pitches when I accompany artists on their releases. So for you who wants to break into rap, I’ll drop 3 basic tips to pitch a single in a convincing way. And as theory is nothing without practice, I will also share with you 3 tracks I received on Groover whose pitch convinced me!

As you may have noticed, it’s not always the best artists that make the biggest hits in rap. It’s a jungle and in the jungle, the smartest can beat the strongest; and the fastest can break through before the most agile. So it’s important to fight with every weapon at your disposal.

The priority, of course, is your music and its quality. But if you are too confident in your ability to convince alone, you forget that other rappers also make good music. This is where the pitch comes in as a powerful communication and argumentation tool. In fact, this short paragraph is used to present your music to the professionals who hold these doors. In a few words, you must not only make them want to listen to it and relay it, but also show that you master your subject.

When you contact a pro, on Groover or by email, the first thing he/she does before clicking on the link of the single, is to read your pitch. Why? Because the pitch conditions the listening. It tells us what kind of track we’re going to listen to, how it’s unique, why it’s right for the media or the label. For example, as a hip hop media, I need the pitch to tell me if it’s a rap single and it’s even better if I know right away that it’s drill, boom bap or cloud.

It is important to understand that when you send a title to a pro, you are asking for work. Making the effort to make his job easier with your pitch is a sign of respect for his time and he will appreciate it. On the other hand, without a pitch, you give him an argument to open another email. Finally, with a good pitch (and maybe one or two follow-ups, if necessary), you will convince him to listen!

On top of that, a good pitch proves that you are well surrounded, or that you know how to talk about your music. This is absolutely essential to get known in the rap industry. For example, if a media wants to relay your music, it must make sure that you know how to answer properly in an interview. And it’s the same if a label wants to meet you!

At this point, I think you’ve captured the importance of the pitch to succeed in rap. Like I said, it’s a jungle and you must master the Art of War to ensure success. “Know your opponent, know yourself and you will not jeopardize your victory”: the words of Sun Tzu apply perfectly and guide the next tips. Now that I have drawn a historical quote, I hope you will never neglect this step again.

These are real people who create the playlists, write the articles and make all the decisions that will help you succeed in rap. Your job is to convince them to believe in your track. How do you do that?

Put yourself in their shoes: they receive tons of emails, daily. Your recipient will not have much time. On top of that, you’ll be competing with messages coming from press officers or managers who have been working in the business for years. So if you’re just starting out, you have to show that you understand the game. I had written an article explaining how to promote your music by email but you already understand that if it has to be short, your pitch has to be even shorter. 3 sentences, 3 lines: that’s the maximum for a rap single.

The better you know your opponent, the more impactful you’ll be. Tips #2 and #3 from this article on the 5 free techniques to stand out in rap are relevant here. So I’m getting into a very concrete example of pitching a rap single. You want to pitch to Interlude because it’s a credible rap media? They have a weekly article that lists releases and sometimes includes discoveries. If you think you could be featured, check out the way they talk about the artists they’ve already selected! For Squidji, they call it “incisive trap”, for Doni M “soaring” and for Young Austin “retro futuristic”.

If they like these words, why change a winning team? Look at the different keywords that are used by the media you are targeting and note the ones that might match your sounds. Put one or two of them in the same sentence and you already have a point! Be careful though: talking about your music with existing codes should not make you produce your music according to these codes.

Of the three sentences you need, you have one. For the next two, remember that you have humans in front of you. You have to speak to their emotions. To do this, you have to prove that you are telling a unique story. So you have to know yourself.

Many people confuse the pitch and the bio. Your bio is one or more paragraphs about your experience as an artist (projects, stage, featurings…) and your personal history. The pitch is a short argumentation to defend a single or a project. For that, you have to introduce the artist and add a summary of your bio.

| Check out: How to write a good biography

It’s up to you according to your story and the format of your single. If it’s a clip, it could be interesting to write a sentence about your clip : what it tells, the aesthetics, the references made… As well as a sentence about your particularity as an artist : did you give up your job as a Marketing Director for rap ? Do you have a degree in fashion design? Have you ever done a big feat, a big stage or a radio show? This is typically the kind of thing that can convince a pro.

With the help of your loved ones, to take a step back, identify your strengths and understand how to build on them! Be inspired by the stories of artists who have been successful in rap or other genres. Get inspired by entrepreneurs or atypical career paths. You will see that they often use a significant event in their life to talk about themselves… Well, it’s their pitch!

Examples of rap singles that pitched well on Groover:

There you go, you should have understood the stakes of a good pitch to make your music known when you promote a rap single! As there is nothing like an example, I give you 3 that convinced me on Groover:

Not only the song is good, but from the first sentence, I knew what to expect. Indeed, the artist was presented as eclectic, combining singing and rapping with pop inspirations. In the pitch, his team emphasized the visual identity that reminds science fiction. They were right, because it’s still a rare enough trend to be highlighted!

When a track plays on specific sounds (and what’s more, relatively rare), you have to go all out. It is indeed a rap track but the pitch specified directly the UK Garage influences by quoting reference artists like Jamie XX. If it’s sharp this kind of comparison can be very effective! Avoid comparing yourself to Pop Smoke, but don’t hesitate to compare yourself to Laylow, for example.

This track has a lot of substance and references. It demands an attentive ear and the pitch prepares it by mentioning the appearance of the artist on the rap planet of 7Jaws. Moreover, the autobiographical card is totally assumed and it is not without importance because it makes you want to know the artist and thus, to listen to the track.

How to use Groover to promote your music effectively?

How to make your streams take off on streaming platforms?

Tips and Tricks to Maximize Your Chances of...