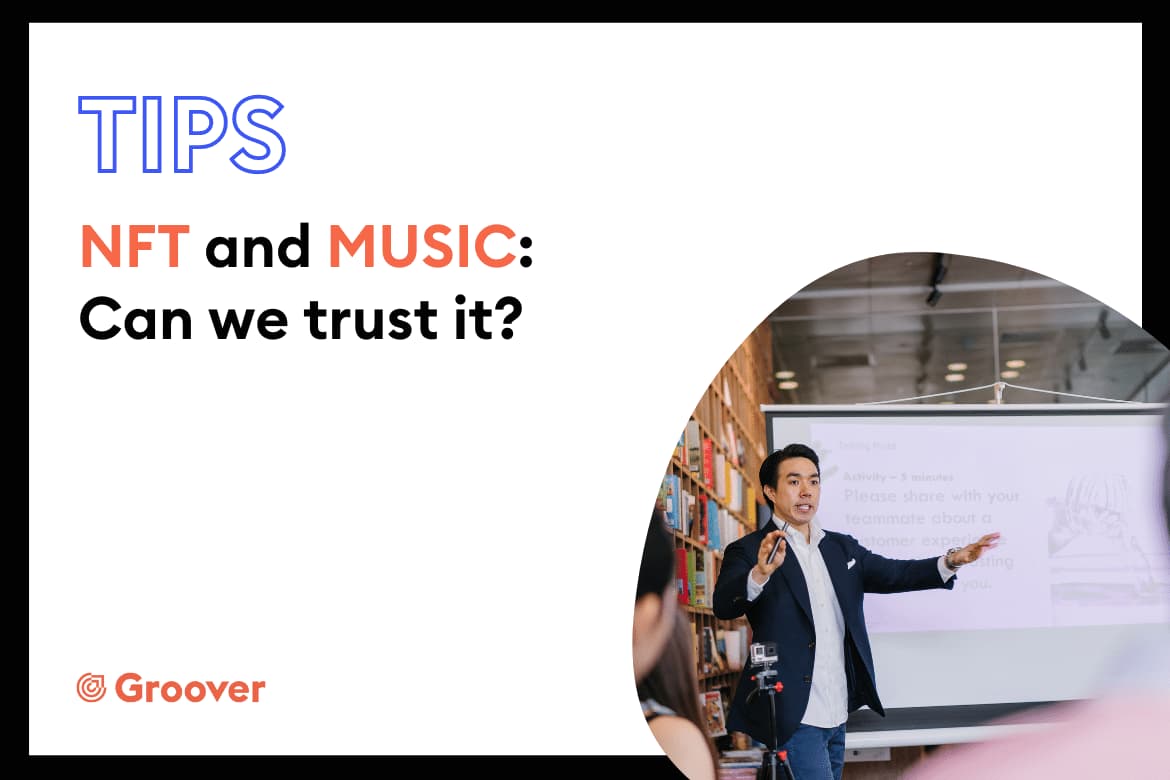 NFT stands for “Non fungible token” and has gone from being a niche topic to one that everyone is talking about in the music industry in a very short time. Finally a technology that allows artists to be paid at a fair value; what good news! So projects around what could be described as a digital certificate of authenticity are swarming. They are generally present in music and art. It’s just a matter of time until big brands invest in the field, like the streaming king, Spotify, for example. This new financial windfall is also a good way for a musician and songwriter to maintain a close relationship with their audience and thus to promote their music.

So are NFTs just a technology to be forgotten as quickly as they appeared in the music industry? Some evidence suggests yes, some suggests no, let’s take a look at the situation.

Summary:
What is an NFT ?
NFTs and music, a breathe of fresh air ?
NFTs, a not so dark future for the world of music

This is a question that has been asked by many in the last year. You may already know the answer because the subject has been discussed so much, but here is what we know. A digital document can be duplicated, a simple right-click – save … done. The rarity of an object that determines its value, it is difficult to give a value to something reproducible.

NFTs solve the problem. It is a certificate of authenticity, unforgeable, non-reproducible. How does it work? An NFT is indexed to blockchain. This is another concept that is not easy to explain but one that we often hear about. Remember that blockchain is a technology that allows to authenticate data, like a crypto-currency or an NFT. When a file is backed by a blockchain it is unforgeable, that is the difference with a classic digital file. That’s why the file can get a value.

NFTs are very popular in the graphic art industry. Many artists are discovered thanks to this new way to distribute their art, like Fewocious for example. In music, we could see some initiatives taking shape. Jacques, for example, sold his track “Vous” second by second, to his audience. Koba LaD offers exclusive content to his NFT holders, as well as Agoria, one of the French pundits of electronic music.

NFTs and music, a breathe of fresh air ?

In recent weeks, the market for NFTs has collapsed. Between February and March 2022, transactions went from $3.9 billion to $964 million. There are several explanations including the very high fluctuation of the cryptocurrency Bitcoin. But a lot of people lost a lot of money and even if we can imagine that the market will recover, for the moment, NFTs make people doubt about their lasting impact on music sales.

A prominent example, the very first tweet by the founder of the platform, Jack Dorsey, was sold for $2.9 million. Sure of this investment, the entrepreneur Sina Estavi tried to resell their property a year later for the sum of 48 million dollars. Unluckily, the best offer they are currently being offered is only $1,213.62. This was one of the stories that had put a spotlight on NFTs, it is obviously representative of the trend.

In music, artists seem to have been a bit more cautious on the subject. There is yet to be a massive investment in the concept. With the aim of exploiting this new mode of income, there have been various initiatives set up quickly,. As long as you promote your songs and albums well, getting people to listen to your music isn’t as hard as it used to be. But what about buying music? In spite of the large number of listeners and subscribers on streaming platforms, royalties paid to the artists remain very low. So for artists and their music, NFTs are a godsend, but you still need to sell some. An ounce of fame isn’t enough to succeed, because streaming gathers millions of users but also millions of songs. It is necessary to build a solid project and only then, musicians will gain visibility.

Many big brands are jumping on the concept very quickly, for fear of being late. Nike for example has bought the company specialized in NFT of sneakers RTFKT. A frantic race to the one who will be the most advanced in the field, seems to have started. For example, Universal Music Group. The major label launched in the Web3 (new iteration of the web, decentralized), by creating a group called Kingship composed of Mutant Ape or Bored Ape, extremely expensive digital avatars. Snoop Dogg, who has just bought Death Row, wants to turn it into an NFT label. Bare in mind that he is a very assiduous collector.

But one example catches our attention, it’s Spotify. Today, you can only display your NFT collection on buying and reselling platforms, or virtual spaces. So Twitter, for example, is working on putting its NFTs in a profile pic. However, another company has shown interest: Spotify.

For a few weeks, it was possible to see the NFT of Steve Aoki and The Wombats, on their Spotify. An ideal way to extend their target to non-initiated people. Only the feature is no longer available. Either they got scared by the drop in the market, or they’re continuing to develop the idea behind the scenes. Either way, the timing is quite surprising for the music industry.

Want to promote your music?
Groover allows you to contact the best media and music industry professionals, with a guaranteed response time of less than 7 days.

NFTs, a not so dark future for the world of music

Currently, the NFT is not popular. It worries investors who see something too unstable and makes its detractors smile. However, the technology on which it is based is very interesting, and the very concept of NFT is not to be discarded, on the contrary. Earning money when you are an emerging artist thanks to your music is not easy. A stream brings almost nothing, merch and concerts are rarely enough when you start. So why not an NFT ?

Remember the internet bubble. At the very beginning, investors rushed in, investing crazy amounts of money in the field, until the bubble burst. Many lost large amounts of money. The NFT market is reminiscent of this episode, and look: the Internet is still present in our lives and much more. NFTs are technologies that will enable a lot of things for musicians, but at the moment they are not well used.

There are various initiatives that make less noise than the Bored Apes and other NFT star projects, but that deserve the attention of developing artists. Pianity for example, a French agency that connects an artist with his audience, with which Groover has recently partnered. Bolero Music, is a similar marketplace that helps maintain a link between artists and fanbase, thanks to NFT. The Renaissance NFT agency, which is also behind Jacques and Agoria’s projects, accompanies artists in this way, allowing them at the same time to make their music known.

We are in the infancy of NFT in the music industry and the future may tell us that an emerging artist will no longer be able to bypass it to release their singles and various music projects. After all, it’s a very direct way to connect with your audience when used wisely. It is also a new source of revenue, which can feed the musical creations of artists and encourage the emergence of new artists. NFTs may well change the future of music.

Need feedback on your music? Get in touch with music industry pros on Groover now!

How to pitch your music to radio stations?

Audio mastering, what is it for and where...

5 Tips on How to Make Newsletters to...

Success in Music: 7 mistakes to avoid in...

How to export Slovenian music internationally? Interview with...