Distribute your projectTips for musicians 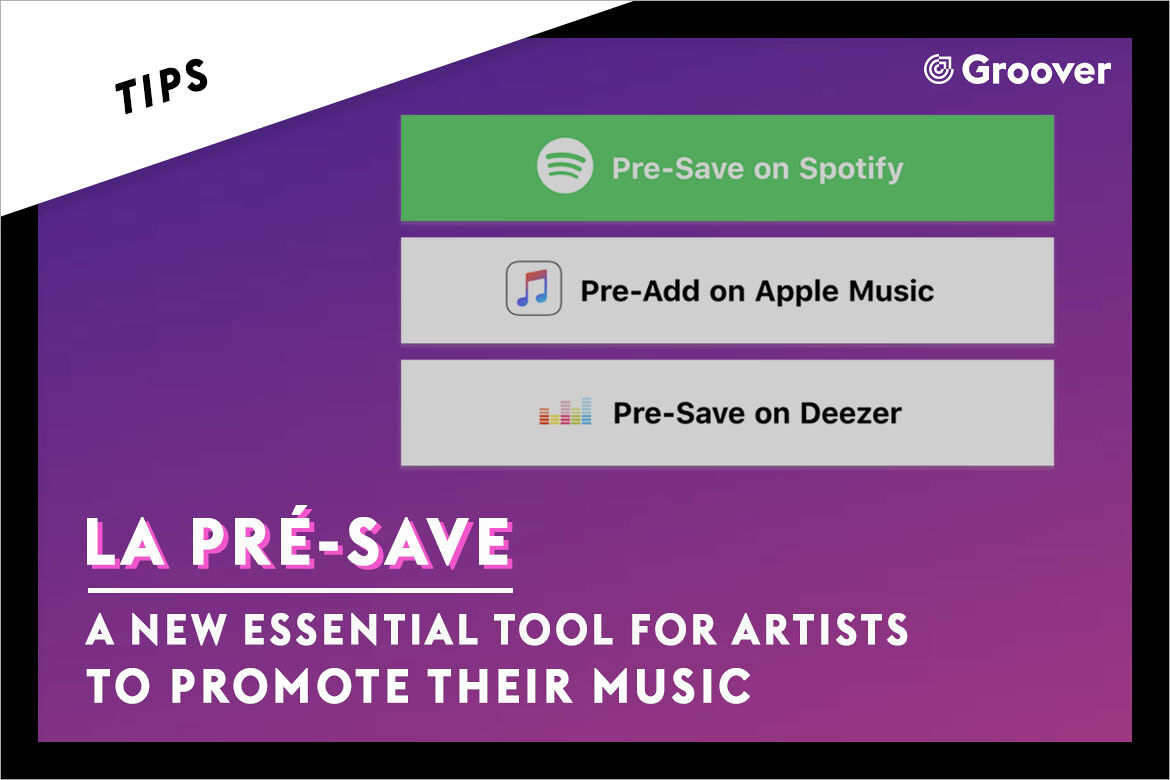 Before making your music accessible to everyone on streaming platforms, it is essential that you set up all the conditions so that the song is released with a bang- boosting listens, shares, clicks, additions to playlists, etc. The pre-save function may be the tool you need to improve the visibility of your work or even make it viral at the key moment of its release.

The day a song is released: a moment of truth for the artist

The first invitation of the public is essential for all creative people: directors, musicians, actors, painters, comedians and artists of all kinds. That’s why we published an article guiding you in the structuring of this special day. It turns out that this day actually starts much earlier than you may think.

Platforms like presave.io and feature.fm have emerged that allow your followers to pre-add or pre-save your tracks before they appear. As you know, the role of the “first listeners” is essential in the context of a viral promotion campaign. Getting your song added to playlists is a major springboard for all artists. Hence the interest that your music is added to playlists in advance, even before the songs are released.

How to use the pre-save function

The process is relatively simple. The pre-save service allows you to create a pre-save page, i.e. a promotional page announcing your title / album that contains the cover and the exact release date. This page also highlights a series of links to your different streaming platforms (Spotify, Apple Music, Deezer etc.) As soon as the user clicks on one of these links, he will automatically follow your profile on the platform in question and pre-save your titles in his library. It is obviously advisable to specify on this promotional page that by connecting, the user agrees to follow you and save your album. Existing services do this automatically. The pre-save is a kind of digital evolution of the pre-order.

If you test on feature.fm for example, once your page is created, all that remains is to broadcast it on all your communication and distribution channels. Don’t neglect any channels (emails, external Youtube links, Facebook Messenger etc.)

What are the benefits of pre-save?

Advantage n°1: use the data collected by the pre-save page

The digital aspect of the pre-save represents an opportunity for the artist to exploit. In the physical distribution model that still prevailed fifteen years ago and even in this first era of digital distribution, all the information related to your fans’ data was only accessible to distributors. This new pre-order model gives you two promotional levers:

The pre-save page includes links to streaming platforms optimized to improve the user experience. This simplicity encourages the listener to connect his social networks and the platform then segregates the data. You will then get a precise table of data including age, location, favorite listening platform and a plethora of other information.

Advantage n°2: a direct and original communication with your fans and future fans

Another benefit of the pre-save function is that you can accompany your release campaign with a game/competition/draw. Your fans can win a derivative product, a dedication, a meeting (etc.), if they presave your title in their library. The approach has already been well tested, notably by Label Reach Records (Atlanta USA) during the promotion of Lecrae and Zaytoven’s album, “Let The Trap Say Amen”. A random draw offered one of the participants a $300 in-store discount voucher.

In addition to boosting their release on streaming platforms, the artists were able to see that their biggest fans lived in Dallas and Atlanta and that 60% were between 14 and 25 years old.

The analysis of this data is likely to support you well beyond your communication. The knowledge of the geography of your listeners can guide you in the organization of your tour, your showcases, and your dedications.

Advantage n°3: boost your release and optimize your chances of being heard

It is possible to ensure a maximum of listens on the release day of your album using this tool, the exchange being clear, moral and legal: key data for your communication & the boost of your release with the possibility of rewards.

In particular, boosting your visibility on Spotify requires entering your song into the platform’s algorithmic and editorial playlists, giving you a strong increase in visibility. It has been proven that tracks that show strong natural traffic and are added to many playlists- this can be done through a successful pre-save campaign- were detected by Spotify’s algorithms. You increase your chances of being spotted!

Idea for the truly motivated: you can take the logic a little further and suggest to a specific media to include your pre-save campaign in a section that informs readers each week about new and upcoming releases. Like how movie theaters promote “Coming Soon” feature films.

How to monetize your work as a musician:...

Audio mastering, what is it for and where...

What is an Artist Entrepreneur? Is it different...