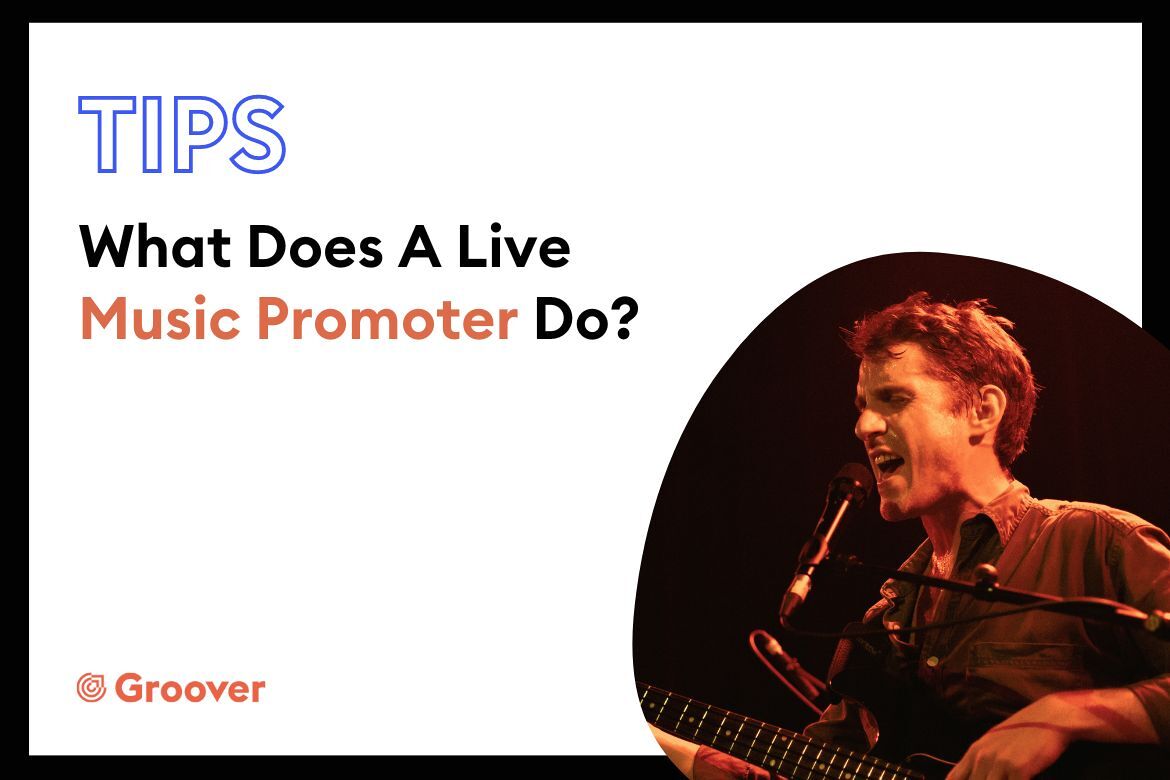 A music promoter is somebody who hires a venue, books artists for an event or gig, sells tickets, publicises the event and ultimately, tries to make a profit. Live music promoters run a business, calculating expenses and earning income through ticket sales, sponsorships and sometimes even a cut of artist’s merchandise sales. They can also help you earn money as a musician. Playing gigs and working with a live music promoter as an independent artist can be daunting.

What are the different types of promoters? What exactly do they do? Who should you work with as an independent musician? How can they help you grow your fan base, promote your music and get visibility?

1. What does a live music promoter do?

A live music promoter is an event manager who effectively organises and ‘owns’ a gig. If there is a particular music venue you want to play at, in many cases you’ll need to contact a promoter and not the venue itself.

A music promoter hires out the venue, decides who plays, decides the price of the tickets and is responsible for paying performers and sound engineers. They’re also the person who either makes a profit or a loss at the end of the night. A music promoter can be either a single person or a company.

One of the biggest promoters in the world is Live Nation, who promote gigs at a grassroots level as well as huge, internationally recognised festivals. They also own music venues of varying sizes in multiple countries.

Larger live music promoters often run several gigs at different music venues simultaneously. Obviously the promoter can’t be in two places at once so sometimes the person running the event on the day will be a person called a ‘rep’, short for ‘promoter representative’.

2. How do I find a music promoter?

If you’re ready to play a gig and reach new audiences on the live scene, it’s time to find a music promoter.

The best way to get a feel for the live music scene you want to be a part of is to go to some gigs!

Smaller gigs are more likely to have the show’s promoter there on the day.

When the gig has finished, seek out the person running the operation and introduce yourself. Be friendly and courteous- nobody wants to work with a rude artist!

Also be sure that the music promoter works with artists of your genre – you don’t want to approach a heavy metal promoter if you’re a folk singer-songwriter!

If you have friends of a similar genre who play live shows, ask if they can put a good word in for you with music promoters that they work with. You could even ask them for email addresses that you can use to get in touch with potential promoters in your area.

A lot of music promoters will have a contact email or submission form on their website. Promoters are always on the lookout for new talent to work with, especially for smaller gigs.

If you’re an artist with an established fanbase and you’re looking to play festivals and bigger shows with high calibre artists, a booking agent may be a good option, as they can do most of the leg work for you.

| Read also: How to find a booker?

Groover is a platform with an easy submission process that can help you connect your music to live music organisers and booking agents without you having to spend hours seeking out contact details. With one click your music and portfolio can be sent to high profile events industry professionals!

3. How should I approach a live music promoter?

When approaching a music promoter, be sure to let them know what gigs you have already played, if you’ve previously released music and if you’re releasing more music in the future.

Having good branding as an artist can be just as important as making good music. If you have a press kit, be sure to send this over to the music promoter so they can get a feel for you as an artist. Having a strong social media presence is always a bonus, as music promoters can see that you have an engaged fanbase and you have a platform to promote their show.

| Read also: How to write the perfect press kit?

They may also want to see a video of you performing live so they know that you sound just as good in person as you do on Spotify and Apple Music! This doesn’t have to be a feature-length film- a short clip is usually sufficient.

4. What are music promoters looking for?

Live music promoters want to help develop new talent and increase their profile as an artist, but they also need to make money.

If you know you can definitely sell some tickets for a gig you’re playing then be sure to let the music promoter know this! Gig promotion is a business after all and the promoter wants to make sure they will make a return on their investment. Be honest about how many tickets you think you can sell, exaggerating your ticket worth will make you seem untrustworthy.

If you’re supporting another artist at a gig, a live music promoter will usually want you to play a set of around thirty minutes. Make sure you have enough material to cover this amount of time before booking any shows.

Most importantly, music promoters want to book artists with potential. If you work well with a promoter and give a great performance, they are more likely to book you again and give you better opportunities with more established artists.

5. What type of deal is best for me as an artist?

Some promoters don’t pay artists at all. If this is the case, consider if the exposure you’re getting from the gig is worth the potential financial loss. You may still be expected to cover your own travel expenses and food and drink costs, even if you’re not getting paid.

Other music promoters may agree to a guaranteed, flat fee for your performance, usually paid to you after the show. In some cases, if you sell over a certain number of tickets, you will get a small commission as well.

Some promoters may only pay you if you sell a certain number of tickets. If this is the case then be wary, you may bring down a substantial number of people to the show and still receive no financial compensation.

If you are an independent artist just starting out, a flat fee deal can ensure you get paid for your work regardless of how many tickets are sold. If you have a loyal fan base already, a flat fee deal with commission on top can be a great earner.

6. Which music promoter is best for me?

Playing shows with smaller live music promoters can be a great way to get involved in your local music scene, meet new people and support smaller businesses.

Larger promotions companies can also be very helpful though. If you wish to play shows outside of your hometown, a larger company that you’ve already worked with closer to home may be able to organise gig opportunities within their company in other towns and cities, introducing you to new potential fans further from home.

| Read also: How to book gigs outside of your local area?

Live music promoters are a crucial part of the music and events industry and can give you a great platform to grow your fanbase. No matter the venue, put on the best performance you possibly can – you never know who might be watching!

Send your music on Groover ⬇️

How does the Youtube algorithm work? Gain visibility with your music videos

How to prepare the release of a single...

How to pitch your music to radio stations?

Where To Perform In NYC as an Independent...