5 Keys to Success on Patreon: Tips for Musicians 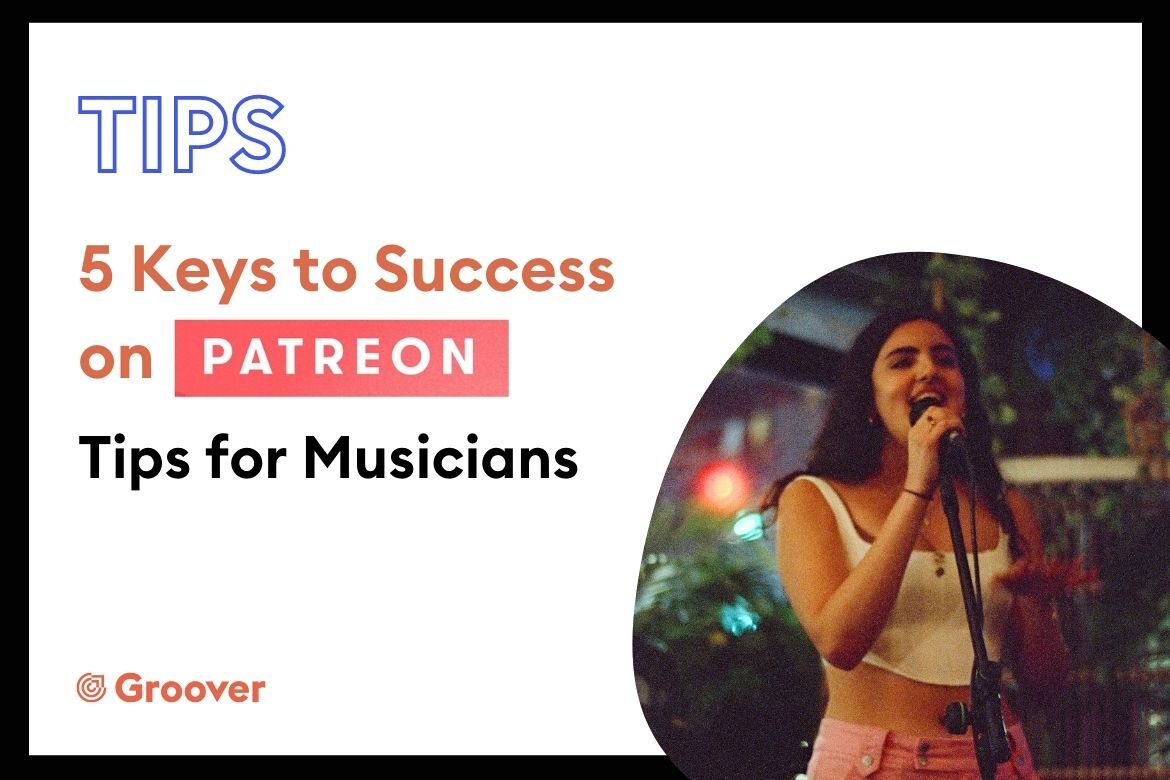 When it comes to making money as an independent artist, opportunities can be inconsistent. We know streaming royalties aren’t enough to sustain most musicians. The cyclical nature of a new album release with merch and touring can be costly on its own. A steady monthly income is a welcomed sight, which is what a platform like Patreon helps to achieve. Success on Patreon is about achieving financial stability and building a special bond with your fans.

Patreon is a platform that allows all types of creators to generate a recurring income stream through a membership model. Their fans and supporters pledge money on a monthly, or per creation basis, in return for certain benefits decided by the creator.

As great as a consistent cash flow sounds, I can tell you launching and maintaining a membership business is not easy. I’ve helped launch Patreon campaigns for three other musicians, two flopped while their peers ended up abandoning their pages as well.

The third campaign was able to reach the top 100 Patreon pages in the music category for years with over 600 paying members at one point. As of this writing, I’ve been managing Patreon memberships for two artists the past 4 years.

If you are considering starting your own membership-based business for your music, I will share my top 5 tips for a successful Patreon page.

Looking for more insights, strategies and tactics? I wrote an eBook “Patreon for Musicians” where I go more into depth on the topics I cover in this blog and a lot more.

1. Have an established fanbase

This is not the end all be all for a successful Patreon page, but it’s a key starting point.

Without discovery features on Patreon, it’s your responsibility to draw them into becoming members. This is why you’ll need to build an audience on another platform first. In other words, Patreon shouldn’t be a focus for most new artists just starting out.

What I found from studying the top Patreon campaigns for musicians was that on average, you can expect about 1% of your largest social media following to join. Let’s say your largest following is on Instagram and you have 20,000 followers. If well executed, your Patreon campaign should be able to bring in roughly 200 paying members.

Just because you have a large social media following, doesn’t mean you’ll be able to recruit a lot of people into your Patreon. I’ve seen it first hand as well as from observing other heavily followed creators who struggled to grow.

One of the campaigns I helped launch in 2018 was for an established artist who had over 100k social media followers and 300k monthly listeners on Spotify. Despite the larger following, we couldn’t get more than 50 people to make the jump in the first few months. Of course, there were many factors at play, but it’s certainly not all about size.

For the one Patreon page I helped launch that was successful, he has about half or a third the social media following. I’ve seen a couple of other musicians grow their Patreon pages with even less.

Growing a membership page with a smaller following is not impossible, especially if they are highly engaged fans, but it’ll be a harder hill to climb.

Looking to get your music heard? Get into Spotify playlists, get featured in the media, get on the radio, thanks to Groover 🔥

2. Think outside of social media and emails

For most independent artists, social media and email marketing are going to be the most accessible channels to reach your fans. But, they may not be the most effective in converting them into Patreon members.

Email will fare better than social media in regards to conversion rates, but you may need to consider a more personal and direct strategy to persuade them to join. It could be using a text message marketing tool like SuperPhone and Community or even sending a DM (direct message) to fans one by one on Instagram.

For the first Patreon page I helped launch back in 2017, the conversion rates from using SuperPhone was significantly higher for recruiting patrons than email and social media combined. Using the latter, we ended up with about 19 patrons in our first wave of promotion. After sending out a mass direct text message through SuperPhone to around 500 fans, it jumped up to around 65 for a 9% conversion rate!

Most artists aren’t using any text messaging platform, so you also try reaching out to fans individually. Assuming you have fans with a strong emotional connection to your brand, direct messaging fans individually can be surprisingly effective. It’s not scalable, but that personal one-to-one interaction is what I’ve seen work so well for my client to grow his Patreon membership into one of the top ones in the music category.

The best way to start on Patreon is to keep your tiers and rewards simple.

One of the big mistakes I made in the past was overcomplicating how the membership was going to be structured with all the various benefits we wanted to offer. At that time, I believed that you needed to show fans a polished and fully-built out membership page to impress them. Investing all that time and energy up trying to get it “perfect” before launch is not the best use of your time.

After many years using Patreon, I realized that there are more advantages to starting out simple:

When you’re starting out, set the foundation for your Patreon page with 1 to 3 tiers that offer your core benefits. However, you want to make sure the other elements of your membership page, like the about page, the introduction video and branding, are on point. Your cheapest tier should be $3 or more.

Offer digital rewards first and hold off on the physical merch until you have a system in place. Patreon does not have features in their platform for you to easily manage and track merch offers if you’re producing your own merch to ship.

Remember, it’s better to add and adjust as you go rather than breaking things down to change something already built.

4. Give fans what they want

This might sound a bit obvious, but if you offer what fans are looking for, they’re more likely to stick around. Before launching, try asking fans directly on social media to help generate ideas on what they want to see offered.

For some guidance, take into consideration what Patreon has found to be the most popular benefits across all creators:

You’ll be in good shape if you offer these types of perks with your membership page, but you might want to find out from your fans directly.

For your current patrons, use the built-in polling feature as a post on Patreon.

There are also exit surveys in Patreon that are sent to fans who delete their subscriptions. Although no one wants to lose a paying member, this is an opportunity to see if there’s anything you do to improve the membership experience on Patreon.

This is a reason why you want to start simple. You can incorporate feedback from your fans as you grow so your Patreon page is built around benefits they’re more likely to be excited about.

Lastly, when considering implementing a tier reward, you have to think about how much time and energy it takes to do it on a regular basis. Even if it’s something your fans really want, you have to be realistic about being able to fulfill it every month. You’re aiming for high impact benefits that require low time/energy.

Even with the right strategy and game plan, growing on a new platform is going to take time and patience. There’s a lot of challenges involved so it’s something you must commit to if you want to be successful.

This means don’t get discouraged when you don’t see the results you were hoping for after first announcing your Patreon.

You have to keep promoting. Even with the artists I work with, we could always be promoting and innovating more. It’s a lot of work.

In Patreon’s first ever 2022 Creator Census, they discovered that 79% of creators promote their Patreon at least once a month, while 43% promote it at least once a week, mainly on Twitter, Instagram, and YouTube. The creators that promoted more frequently earned more on average, not surprisingly.

In my Patreon for Musicians eBook, I talk about the different tactics I’ve used for promoting Patreon.

I hope this blog has provided you with useful insights on what I feel are the top 5 keys to becoming successful on Patreon.

As an advocate of the membership model for musicians, I’ve seen the positive impact it has had for my client. He struggled throughout his 20+ year career to earn a sustainable income from music without having to do endless tours and shows.

If you want to start with a membership-based model for your music, the good news is it doesn’t cost anything to set up or launch a page. Patreon only earns money if you’re able to generate an income from fans on their platform.

To get started, head over to Patreon.

If you’re looking for additional help with Patreon, check out my new eBook – Patreon for Musicians.

I breakdown everything for you in my ebook where you’ll learn:

Promote your music on Groover ⬇️

Swiss Army Knife for Independent Artists. D4 Music Marketing is an online resource that focuses on music marketing, artist development and business education to empower aspiring and emerging artists who want to make a living off music as an independent.

How to Easily Manage your Playlists with Soundiiz...